The Next Step Towards IoT – IOTA Data Markeplace

IOTA (MIOTA) One of the key principles of the blockchain revolution is the ability to give life to one of the most exciting concepts ever designed to date – IoT (Internet of Things). This concept envisions a world where everything is connected to a certain network so that people can create, command, share and debate information. From any device, manipulation-free, you could access some other device given certain permissions. A truly inter-connected and creatively free world.

During this revolution, IOTA foundation decided to announce one of the most striking applications of a decentralized database – IOTA Data Marketplace. This shrouded project was in the oven since 2015 and now it can be seen through the link: https://data.iota.org/ 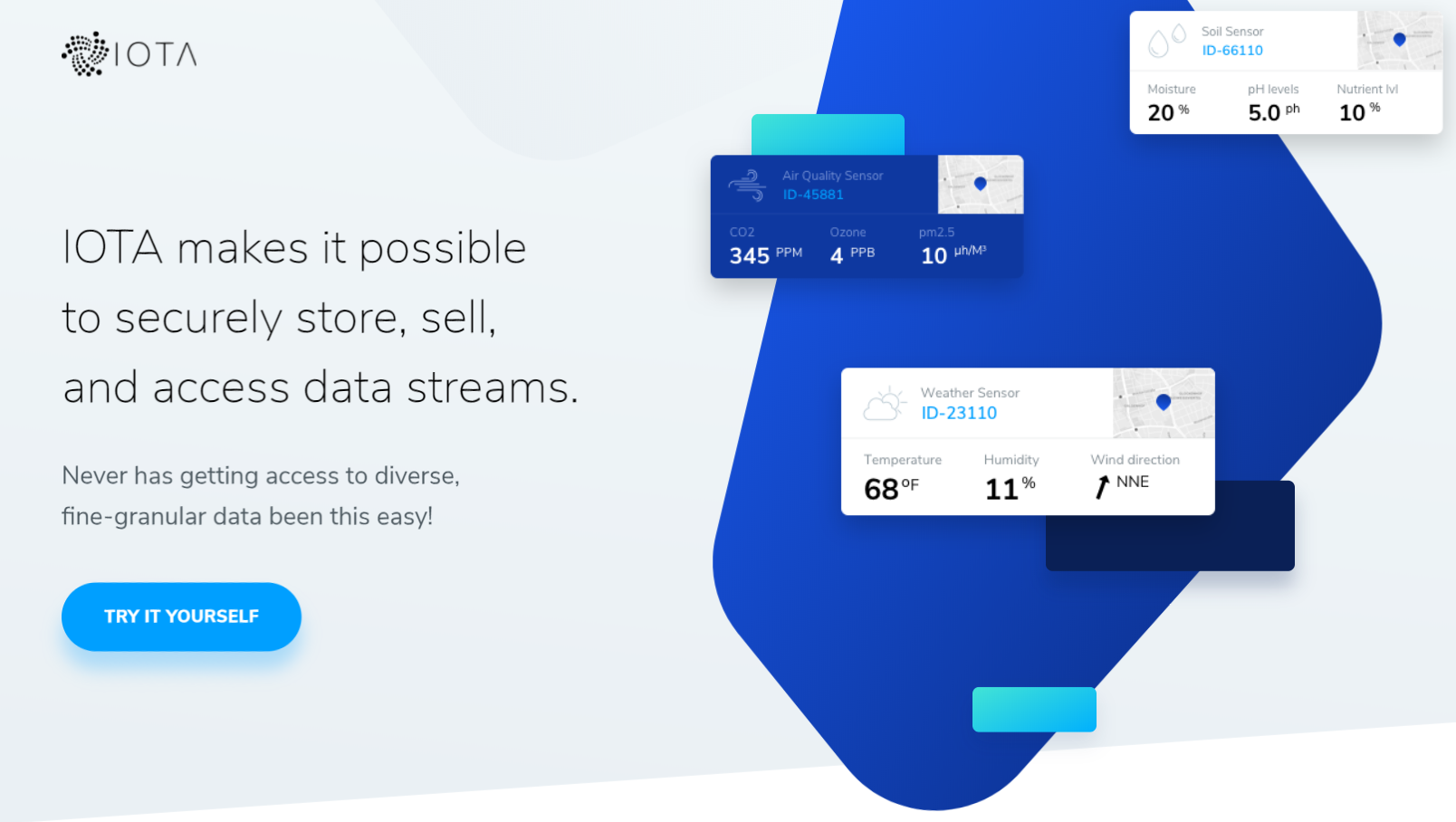 This “pet” project is a projection of how we should handle information in the future. Every year more and more data is created, at an exponential rate, this year alone we created more information than the past 5000 years. Assuming that the rate of data creation keeps increasing exponentially we need new ways to handle this information because knowledge comes from applying the available information. Unfortunately it also works the other way around. Wrong, manipulated or tampered information will cause ignorance instead of useful knowledge.

Our biggest problem? Centralization. Currently we store the vast majority of information in “Data Silos” which are useful for the creating entity alone, and sometimes maybe the costumers of this entity. Most of our Databases hold great value in information and could benefit society if shared. The problem is that these “Data Silos” hold only a fraction of it’s potential value because most of them do not share its data outside its own closed environment.

Now, how can a foundation like IOTA help us achieve this glorious vision?

How to apply this?

Each of the pins on the map represent a Data Stream to be selected upon necessity. By selecting one of the “sensors”, a new pop-up for the “subscribe” option will open letting you pay through a micro-transaction that grants you access to the Data Stream. Finally, with the access provided by this sensor, the goal is to import this potentially invaluable data into your reports, applications and data analytics. 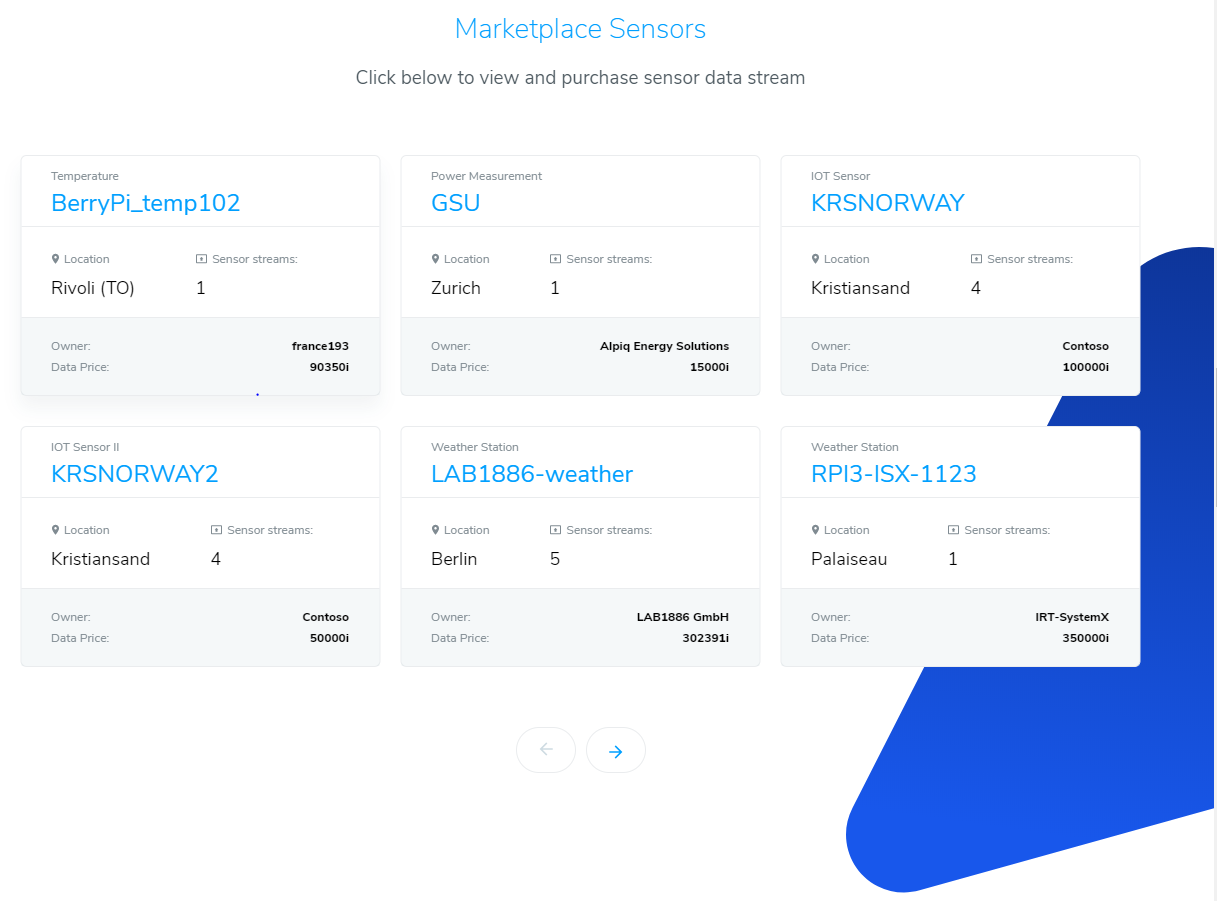 The potential of this application is enormous and comes in convergence with the theories that say that the IOTA foundation is a true leader in the IoT utopia. IOTA relies on sharing data through the Tangle concept. Tangle is a form of Directed Acyclic Graph where every transaction and data transmission validates two previous ones, which again reference their two previous ones and so on. This means that validation of the network is an intrinsic property of using the network and thus is no longer decoupled from the usage of the network.

If you’re interested in learning more about the Tangle consider reading the IOTA Foundation White Paper through https://iota.org/IOTA_Whitepaper.pdf.

Since its official registration in Deutschland (03/11/2017) many partners have been announced in participating in this project alongside IOTA Foundation, some of which are shown below:

These are only a few of the recent announcements of partnerships with IOTA.

Due to previously not having a headquarters and not being registered the Foundation now hopes to fill the gaps created by not being able to spend the funding it accumulated. They will now invest in expanding its group by hiring people to their executive boards and making strong alliances.

IOTA Tangle is still being tested and many people have manifested their concerns about it. Even though sometimes they seem to have red flags other

than this like for example the fact that IOTA has yet to release a wallet that inspires trust to the community or that it is not fully open-source due to fear of having their project cloned, it seems that IOTA has one thing that most of it’s competitors do not: a clear vision of what they’re trying to do, a “sense of direction”. One of the ways that this can be observed is that on their White Paper they express some of the preeminent points of failure that they see towards the Tangle. This shows that they not only know where they’re heading, but they also know the obstacles ahead, which is a very positive aspect.

9 Replies to “The Next Step Towards IoT – IOTA Data Markeplace”