The crypto market looks great today, with the most important coins trading in the green.

It’s been reported that there’s a Bitcoin whale who seems to emerge right before massive market selloffs, and now he’s back.

As noted by a prominent crypto analyst who goes by the name Capo, the wallet has received some pretty massive amounts of BTC right before major market pullbacks at least six times in the past.

“These are the times that the BTC wallet (3PzdbAwvDJ1MiE87J468MQHtK1CjBbhi8y) received supply. Last time was today. Draw your own conclusions,” as cited by the online publication the Daily Hodl. 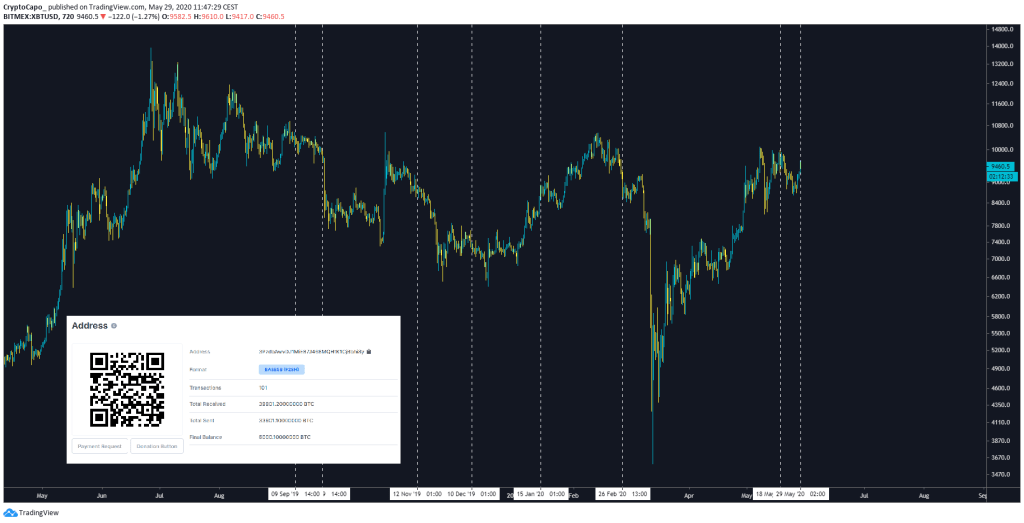 The same analyst said that he doubts that the address is linked with a crypto exchange – this is due to the slow pace at which it receives BTC. So, he assumes that it’s about an investor or a fund that’s preparing to sell.

“He receives BTC, he sells BTC. [There’s a] correlation between incoming transfers and price. I don’t think it’s an exchange. Exchange wallets have many more transfers,” he said as cited by the same online publication.

A lot of analysts are expecting to see Bitcoin re-testing the $10k level once again.

In other news, it’s been recently revealed that JPMorgan said that the king coin is undervalued.

The largest bank in the US is now changing its sentiment about the world’s leading crypto. The latest BTC analysis from JPMorgan is circulating on Twitter, and it’s dated May 22nd.

Based on Bitcoin’s price when their report was published, JPMorgan placed BTC’s intrinsic value at $11,593.