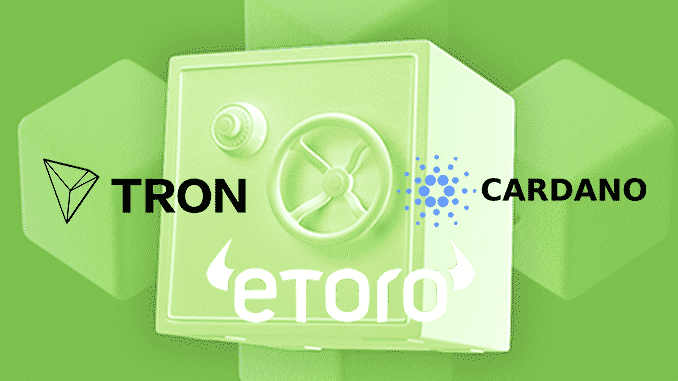 It’s been reported that the crypto exchange eToro is launching a new service that will be offering rewards for staking tokens, starting with Tron’s TRX and Cardano’s ADA as well.

The trading platform revealed that the service, which is one of the very first ones to offer to stake for Cardano’s native digital asset ADA would go live later this month.

eToro will execute staking on behalf of users

According to the reports coming from CoinDesk, eToro will effectively execute the staking on behalf of its users.

“Compared to proof-of-work protocols, which rely on miners running powerful computer hardware to confirm transactions, proof-of-stake (PoS) networks rely on the users themselves to stake, or lock up, their tokens and provides rewards for confirming transactions,” according to the online publication mentioned above.

This service that eToro is set to offer aims to make staking much more accessible for people, according to the company’s official statement.

The exchange will be emailing reports to users and they will show just how much income they made on a monthly basis.

A spokesperson told CoinDesk the service would be free of charge for eToro’s clients.

It’s been also reported that the number of fully functioning PoS networks is surging these days.

Another issue worth mentioning again is that Cardano launched its “Shelley” staking protocol back in July.

Before that, Coinbase Custody revealed their plans to offer secure Cardano staking sometime in Q4 2020.

Cardano’s competition is from outside the crypto space

In other news, the incoming CEO of the Cardano Foundation is Frederick Gregaard, and he recently shared with the online publication Cointelegraph his perspective on fintech’s competitive landscape and major tech trends.

While he was discussing competition, he said that the protocol’s biggest opponents are not coming from the blockchain space. Check out more interesting info in our previous article.