With the recent DeFi movement (Decentralised Finance) gaining traction on the Ethereum network, it is clear that the loan industry as a third party will become obsolete. The possibility of being able to get a loan without the need of interacting with a middle man is truly powerful. DeFi is one of the largest growing sectors in blockchain, reaching last year over a billion dollars locked in as collateral in Ethereum (ETH) alone.

This number will surely grow in the future, and certainly puts in perspective projects like Ren (REN) which focus on extending access to other types of collateral such as Bitcoin (BTC), Bitcoin Cash and ZCash (ZEC) to support these decentralised finance applications.

For Ren (REN) to achieve this, it is of the utmost importance that they achieve Cross-Chain interoperability between all major blockchains. The three assets listed above (BTC, BCH and ZEC) are currently being supported by the RenVM in addition the all other ERC20 tokens and Ethereum itself.

RenVM, for those of you who don’t know it, is an API of sort that can be called within a dApp’s Javascript that will seamlessly allow you to swap between the tokens listed above. This obviously, in conjunction with the power of smart contracts, can then provide liquidity to it that isn’t necessarily Ethereum or an ERC-20

Not only does this allow for a much bigger liquidity poor altogether, it also provides tools that can help trade between tokens 100x times faster than atomic swaps. This also represents an alternative to OTC trading which could also drive institutional demand for Ren (REN).

With the current global situation we are now presented with a reentry opportunity. It would be wise to balance your portfolio according to the developing areas in blockchain. DeFi is certainly a promising one, and if you think Maker (MKR) isn’t enough to increase your exposure to this niche then maybe you should consider adding Ren (REN) to your portfolio.

Following the 2019 summer spike we saw the entirety of the crypto market climb with Bitcoin almost reaching 14.000 USD, Ren (REN) also took advantage and reached 0,135 USD, which honestly doesn’t look impressive but when you see that in that same period of time, Bitcoin rose from 3.400 USD, whilst Ren (REN) impressively started that short-lived bull market at 0.016 USD.

This means that for the same time period, Bitcoin rose 4x whilst Ren (REN) rose by 8.5x which means that Ren will likely outpace Bitcoin in the upcoming bull cycle. Beware also of the time to switch back to more stable assets like Bitcoin or Ethereum at the end of each Bull cycle so you can retain more gains and possibly reenter further down the road on REN. The breakout on the BTC ratio during the mini-bullrun (an important metric) can be seen the yearly chart below. 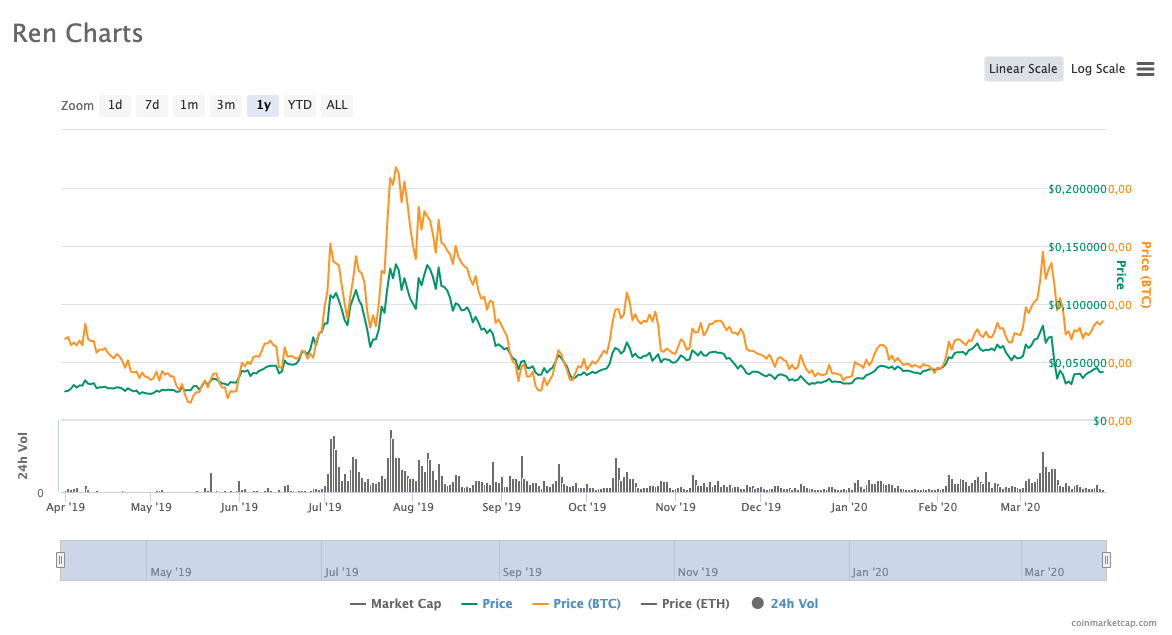