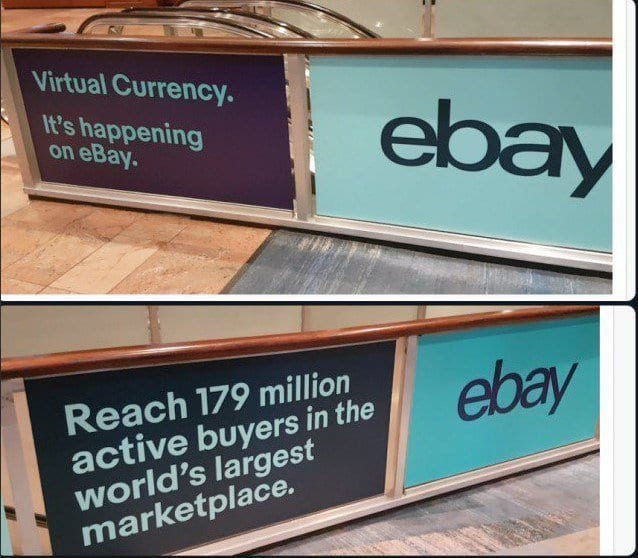 eBay is getting ready to support digital assets and digital collectibles at least according to the new promotional adverts.

CCN notes that these have been spotted at the Consensus conference in New York and the banners present there are suggesting that eBay is about to enter the crypto space in what would be an enormous mainstream breakthrough.

Crypto mass adoption on its way

The images that have been first leaked on the Telegram channel still have to be confirmed by eBay but if these are legit that this colossal move would open up crypto to 180 million active buyers.

“The bidding marketplace may also be eying the digital collectables market, made famous by Cryptokitties in late 2017. The potential of digital collectables was made real by Ethereum, for the first time offering a platform for truly unique, one-of-a-kind digital assets,” CCN writes.

eBay is a mainstream platform for the future digital collectibles, the same online magazine reports.

Official statements are expected – Potential partnership between eBay and UTRUST

eBay has been widely linked to BTC payment gateway UTRUST. They have hired the former eBay and PayPal executive Sanja Kon as the VP of Global Partnerships in 2018.

The online magazine mentioned above notes that a partnership between UTRUST and eBay would be a logical conclusion.

UTRUST stated about the issue:

“Sanja’s experience at PayPal and eBay makes her the perfect person to help UTRUST drive merchant adoption of our crypto-payments platform… We anticipate that she will be a key driver in elevating UTRUST’s brand in the crypto-commerce space and ultimately the future of online payments industry.”

We are excited to announce that we have a new team member. The former @PayPal and @eBay executive Sanja Kon joins @UTRUST, as VP of Global Partnerships.

Back in 2017, CCN reported that the senior vice president of eBay Americas Scott Cutler said the company was “seriously considering” adopting BTC payment.

“This is a trend that everybody is talking about, but sadly, at eBay, we don’t currently accept bitcoin as a form of payment,” Cutler said.

He continued and said “We’re seriously considering it as these cryptocurrencies become more of a mainstream” payment instrument, but we’re not quite there yet.”

As we recently reported there are huge moves taking place in the cryptosphere at the moment.

Bakkt made the most exciting announcement, and crypto mass adoption is getting closer with the help of a new initiative that was announced today, according to Fortune.

Bitcoin is currently racing, and the coin is priced at $7,729.75 on CoinMarketCap. Keep your eyes on the charts.