Hydro is a blockchain based ecosystem built on the ERC-1484 Identity Standard. Hydro’s vision is to become the life of a global decentralized economy.

News of partnerships including Republic Advisory Services proves that Hydro is still alive. Currently in the ‘Ice’ stage of development, the launch of  ‘Snowflake’ on the main net took place in January, 2020.

Hydro dropped another 24% today. This comes after Bitcoin (BTC) and the broader altcoin market stabilize from the recent crash.

What Exactly is Hydro (HYDRO)
Project Hydro launched in 2018 after its initial incubation by Hydrogen, a leading fintech API company. Hydro (HYDRO) is overseen by Hydro Labs. Hydro Labs maintains the Hydro protocols.

News from Hydro (HYDRO)
Having successfully developed their first app in the company’s ‘raindrop’ phase, and launched a dap store on their main net during the ‘snowflake’ stage, Hydro (HYDRO) seeks to launch ‘Ice,’ a document management protocol.

In February of this year, the team announced the news of a new partner ship with Republic Advisory Services.

“We are pleased to announce that following a comprehensive due diligence process, Hydro Labs has formed a partnership with Republic Advisory Services. This partnership will be key in furthering adoption of DeFi services in 2020 through Hydro Labs products –Hydro Pay, Hydro Vault, and Hydro Drive. Republic will also assist the team with enterprise partnerships and fundraising using their global network, as well as rolling out go-to-market strategies.”

Hydro (HYDRO) is ranked number 523 on Coinmarketcap.com with a total market capitalization of US $2.7 Million. Hydro (HYDRO) has a 24 hour trading volume of over US $440,000.  10.7 Billion tokens are circulating out of a total supply reaching just over 11 Billion.

Hydro has been hit pretty hard in the most recent market downturn. The coin is down 24% over the past 24 hours, and is currently dropping faster than Niagra Falls. It seems likely the coin will experience a proper bounce shortly, and then begin to stabilize as we’ve seen with Bitcoin (BTC) and Ethereum (ETH) in the past day. 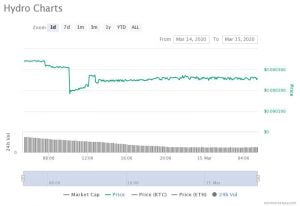 You can find HYDRO on a over a dozen exchanges.