CoinShares says that institutional investors are interested in Cardano as the broader crypto markets are showing recovery signs.

In a weekly report, CoinShares said that Ethereum competitor was able to register inflows that are worth $1.3 million during the past week.

It’s been also revealed that by now, Cardano witnessed institutional investments that are totalling about $28 million.

CoinShares highlighted a specific reason that is driving the weak institutional investments across all digital asset products.

“Despite the continued negative sentiment, it comes at a time of low investor participation likely due to seasonal effects as seen in other asset classes. Volumes are now at $3.1 billion per week in investment products compared to $7 billion per week in May,” according to official notes.

More than that, the crypto asset management firm noted that the recent rally in the crypto markets was able to contribute to a surge in the value of total assets under management (AUM) in all investment products.

“In contrast, sentiment looks to be recovering in the overall crypto market judging by recent price rises. This has pushed total
investment product AuM to $55 billion, rising 10% week-on-week.”

Check out the data revealed by CoinShares in the photo below. 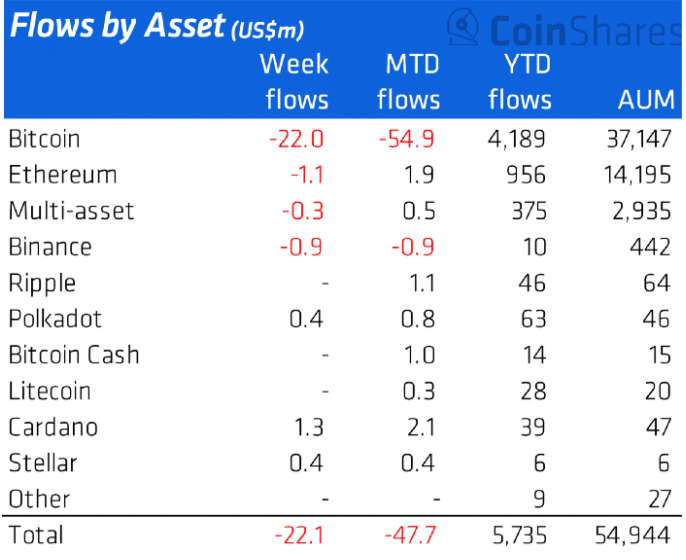 Ethereum’s daily supply is under pressure

It’s been just reported that the daily supply of Ethereum is under heavy pressure as the platform burns thousands of ETH on a daily basis.

Etherchain is an Ethereum on-chain monitoring tool and this shows that the second-largest crypto asset is now torching 4.23 ETH per minute, which equates to 6,091.2 ETH burned per day, worth over $19 million at the time of writing.

As the Daily Hodl also notes, Etherchain indicates that the network “has burned a total of 54,482 ETH, worth over $172 million, since Ethereum launched the London hard fork on August 5th.”

ADACardano
Previous ArticleBitcoin Indicators Show An Upcoming Bull Run, According To PlanBNext Article5 Reasons To Be Bullish On Ethereum (ETH)