The crypto market has been seeing various waves of price corrections for a few weeks now, and the overall sentiment among crypto investors is debated.

It’s been revealed that the leading digital asset manager CoinShares said that institutional investors are in disagreement over the latest crypto correction.

On the other hand, it’s also important to note the fact that the numbers may not tell the full story as some investment providers saw more than 10% of their total assets under management (AuM) lost to outflows.

The same notes continued and revealed the following:

“[These inflows and outflows suggest] extremely polarized opinion amongst investors, with some panic selling during this most recent price decline, while others seeing it as a buying opportunity.”

CoinShares says an example of such polarized opinions can be seen in the inflows and outflows of Bitcoin and Ethereum.

“All the panic selling was focused on Bitcoin last week, Despite this, on an aggregate basis, Bitcoin saw inflows totaling US$51m. Despite this, trading volumes across [BTC] investment products fell by 13% to US$3.1bn for the week.”

The same notes continued and revealed the following:

“Ethereum saw minor outflows totaling US$17m last week, the first time following six weeks of inflows, although it reflects only 0.09% of AuM and is therefore likely not meaningful.” 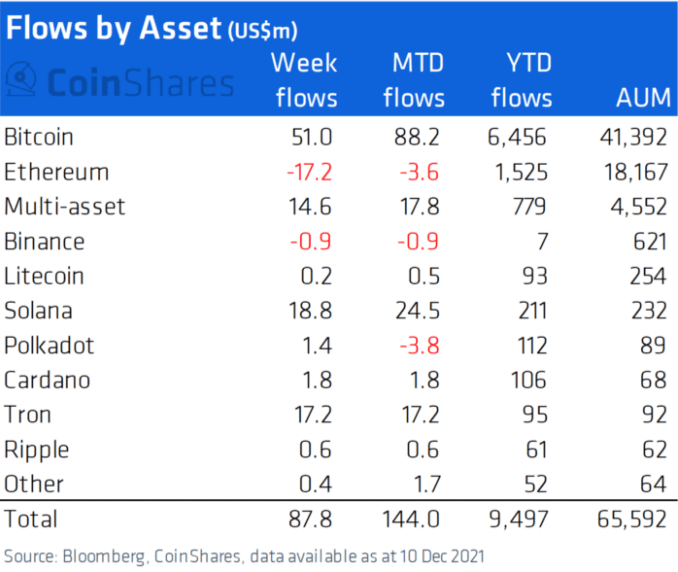 You can also check out some numbers presented in the official note in the photo above.

Other than this, there’s a popular crypto analyst and trader who maps out what’s in store for the king coin as it’s trading below $50k.

At the moment of writing this article, BTC is trading in the red and the king coin is priced at $47,503.