We’ve all known that the IOTA Foundation has promised something big despite the Tangle technology has not been yet fully proven to work. This year at the end of Spring it got alot of attention after getting listed on Bitfinex and the developers community showed a little glimpse of what they had in line. 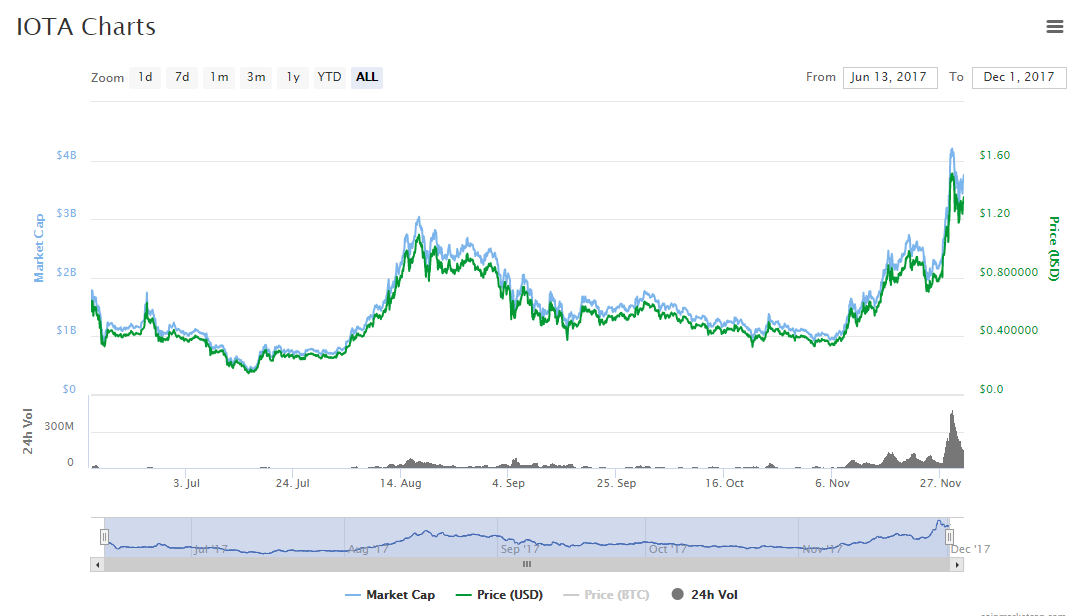 During the following summer IOTA Saw 300% gains, all due to especulation. The growth was gradual throughout July and August, stretching from $0.15 in June to $1.09 in August. A lot of people wanted in and yet no official release was made. The GUI did not perform as people would like. In terms of wallets, besides storing on Bitfinex investors had no other significant alternatives. During the start of September Bitcoin went on a rampage again, and per usual people started to feel the so called FOMO (“Fear Of Missing Out”).

Suddenly, every altcoin is taking a dip. Everyone regrets not being on the ticket. Fans of IOTA do what? They sell.

The community being presented promises of greatness was not seeing them follow through. Even worst, developers are not being communicative enough. No dates announced, no comments.

Now come the announcements. On the third of November the IOTA Foundation is officially registrated in Germany. Funds raised throughout the last 2 years up to the total of 140 million are now available for investing in hiring high executives and making strong new alliances. The new addition of Cisco to the list of partners, a company with yearly revenue of roughly 48 billion USD is a big step.

New partnerships are now being announced almost daily throughout November including not only Cisco, but Volkswagen AG and Samsung. All thanks to the pet Project IOTA Data Marketplace where the concept of premium data streams paid by microtransactions is presented.

Now why is there doubt about the Tangle?

IOTA does not use the standard binary language, instead it uses a system of 3 numerical digits: -1, 0 and 1 (ternary). They plan to make it work through a DAG (Direct Acyclic Graph) where a transaction always verifies two previous ones.

The problems raised were that this software would run on Binary hardware, and doing this could cause issues by becoming too complex. In theory ternary would be more efficient in storing and processing data, but by doing this on Binary Hardware they might encounter difficulties.

And they already did, like for example the hash that needed to be used in this software could not be the same as of Bitcoin since it is a whole new paradigm. Problems were found with Curl, hashing function created for ternary by IOTA. Despite them being solved it raises questions for the future. On top of that Curl was sometimes masked with misleading code by the Foundation in order to not be possible to copy their function. We can understand their need for keeping the project somewhat private until proven but this is a red flag for the open source community.

There’s also concerns that DAG’s may not be able store the order of the transactions properly which in turn make smart contracts complicated. But then again if they promise to bring us IoT we can assume they have some ideas about how to do it.

IOTA Data Marketplace importance is huge for the Foundation right now, simply because it is being supported by the IT giants stated above, as well as many others like Microsoft and Accenture. If they see potential in the Tangle why wouldn’t we?

IOTA is now seeing major acceptance by other exchanges such like CoinOne, OKEx and Binance, which means more people will be wanting in. The price already rallied during these past November announcements to an all time high of $1,50. But this could only be the beggining of something much bigger. Where was ethereum One year ago?