That altcoin sea is looking pretty tumultuous, wouldn’t you say? Without proper sailing/trading experience, it’s probably best to just Tether (USDT) your craft in the harbor of of your favorite exchange. Instead of trading, your time may be better spent handling some basic maintenance on your ship. After all, a lot can go wrong if your boat isn’t seaworthy when you decide to sail again.

Research on the internal workings of next generation coins is one act of upkeep I highly recommend during down times. And as the waves of the blood red crypto-sea crashed against my tethered vessel last night, I decided to investigate a number of coins that have managed to stay afloat through the ongoing storm. And as I searched through the nearly endless list of coins available on coinmarketcap.com, one crypto-gem stood out from the pack. Locus Chain (LOCUS) grew over 200% in the last 24 hours. 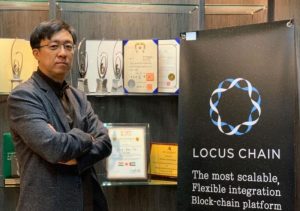 Having successfully developed a series of console games with Microsoft, including Kingdom Under Fire and Ninety Nine Nights, Phantagram Ltd. changed it’s name after dedicating itself fully to blockchain development in 2018.

Locus Chain (LOCUS) bills itself as a foundational technology for the credit revolution. A true decentralized blockchain protocol, this ambitious project is solving a number of problems with current blockchain infrastructure. From increasing transaction speeds to reducing the ledger size, these guys have the tech to surpass the best known protocols in the not so distant future.

Huge advancements in capability are seen with the incorporated dynamic sharding and verifiable pruning technologies. These dramatically decreases the burden of network usage and ledger size current nodes must cope with.

From their Account-Wise Transaction Chain (AWTC) built on the Directed Acyclic Graph (DAG), to their Byzantine Fault Tolerance (BFT) and Post Quantum Cryptography Signature system (PQCS), Locus Chain (LOCUS) has an answer to every problem currently wreaking havoc on better known protocols. And they remain truly decentralized while doing so!

As stated earlier, Locus Chain (LOCUS) is listed as number 585 on coinmarketcap.com. With a total market capitalization of just over $3 Million USD, and an incalculably small trading volume, the coin exploded over 200% in the past 24 hours.

Locus Chain (LOCUS) is trading near $.0036 USD and can be found on the btrade and Idax exchanges. More exchanges will certainly come soon, and you’ll be glad you did your research when your favorite exchange lists them!

As the storms rage on and the waves of the altcoin sea rock the bow of our ship, we can be forgiven for protecting our assets until the worst is over. While we wait it out, I suggest everyone take some time to research some of the next generation technology available in the crypto-space. Locus Chain (LOCUS) is a great example of what the future of blockchain will look like. And as the storm calms and sailing seas beckon us back into the water, Locus Chain (LOCUS) will be ready for you.