All red-blooded, freedom loving Americans can breath a sigh of relief as the dust settles on the graves of yesterday’s presidential candidacies. With the passing of Super Tuesday, America witnessed a number of candidates withdraw from the race for 2020. And while media headlines focused on the departure of well known establishment shills like Elizabeth Warren and Mini-Mike Bloomberg, an underground favorite of the altcoin scene was also getting ready to suspend his campaign. And as the primary votes for the Libertarian ticket were being tallied, the news hit that John McAfee was dropping out…

But a man of McAfee’s intellect and stature cannot be held down for long. And after coming in second on the Libertarian ticket in North Carolina, a renewed sense of urgency filled his campaign. 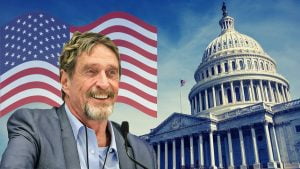 While the Bernie Bros and Biden supporters (if that’s a thing) battled over their irrelevant positions, individuals looking for a third party answer to our country’s problems found reason to rejoice; John McAfee, the Bitcoin (BTC) Candidate, has reentered the presidential race!

And with a wave of his hand, the Twitter feeds exploded with the news.

My re-entry into the Presidential race —

John McAfee is a libertarian by all measures, taking his beliefs to their furthest permutation, and displaying his depravity for all to see. McAfee will not take your guns and he will not stop you from using drugs. He will not spy on you. And most importantly, his presidency would likely see cryptocurrency adopted en mass, never allowing regulation to disrupt our hodl again! 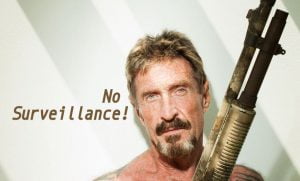 Unfortunately, the inevitable realities of our political situation will soon set in, and linger like this morning’s hangover as we succumb to the whims of the oligarchy controlling our country. And we will accept the new leader chosen for us without fuss as we have in years past. But the public won’t be fooled forever. Many have seen behind the veneer of public interest pinned to the lapels of our country’s current front-runners. I see through it. I think you can see through it. And John McAfee saw through it a long time ago.

We should all take a closer look at McAfee’s campaign. And we should root for his candidacy with patriotic vigor. Just don’t vote for this Mofo. Lulz.

Do you want an ex-con for Potus??

Don't even think about voting for this Mofo!!! pic.twitter.com/Zfk03hqmlq