On the Dread community on the Dark Web, there’s a mind-blowing thread which claims that Wall Street Market has likely exit scammed.

Long story short, the Dream market, the oldest one in the industry, has randomly decided to shut down.

All investors have then moved to the Wall Street Market and the issue debated on Dread is that Wall Street might have scammed these people with up to $30 million.

The official moderator of Dread writes the following: “If you do not know, in the last days, as described by the administrators, we’re experiencing problems due to a server crash that caused our Bitcoin server to be out of sync with the blockchain. These problems result in loss of the control over the wallets for this server until is completely resynchronized.” This issue has never been heard of before in exchanges or even with trading software such as the Bitcoin System.

The moderator continues “For this reason, we had to send coins directly to the waiting list wallet, as we are waiting for this process so that they can be sent to the appropriate escrow wallet. We were told that the site would soon go into maintenance mode to avoid sending more coins and it was estimated that the synchronization was to completed yesterday.”

How Wall Street Market wins with this move

People are sure that the Wall Street Market have exit scammed for sure. Someone even says that from a rational but not moral standpoint this was an intelligent decision.

Here’s how it is believed that they win by doing this:

Some users have been feeling that this might be an exit scam for two weeks now and they contacted the guys directly.

“I’d rather FE than escrow anyway, the drug dealers have stock to sell.. The market operators don’t. And I’m certainly happier with these guys running with our money than with Law Enforcement getting the coins to continue a stupid war. Not that it’s Law Enforcement problem, it’s a legislative problem, but anyway.. Fu*k you LE,” someone writes.

One user confirms everything and even says blackmail is involved. 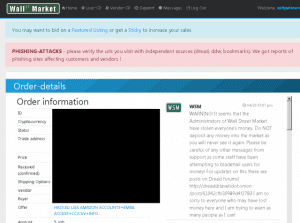 “I CAN CONFIRM!! I am californiasfinest on WSM … support is messaging all my orders which have plain text on their address and asking them BLACKMAILING THEM.. here’s the message I don’t want to post a pic.

Or you gonna be in the list leaked to Europol/FBI

Remember, this is not just a burn drop or a burned packstation, investigations go further once the whole site was crawled and saved and if you pay, include the order id on the dispute message so you can be removed.”

WARNING! It seems that the Administrators of Wall Street Market have stolen everyone’s money. Do NOT deposit any money into the market as you will never see it again. Please be careful of any other messages from support as some staff have been attempting to blackmail users for money! For updates on this there are posts on Dread forums! [LINK TO THIS FORUM POST WAS HERE] I am so sorry to everyone who may have lost money here and I am trying to warn as many people as I can!

It seems that Wall Street Market administration has allegedly done a massive theft and at the same time it’s support team blackmailing users – however one of the main moderators appears to have had their account suspended so perhaps there is a chance that WSM isn’t exit scamming but all the indicators are pointing to the fact that they are, according to the reports above.

It seems that Wall Street Market administration has allegedly done a massive theft and at the same time it’s support team blackmailing users – however one of the main moderators appears to have had their account suspended so perhaps there is a chance that WSM isn’t exit scamming but all the indicators are pointing to the fact that they are, according to the reports above. As Kryptoszene pointed out here, this feels just like the “make money online” sort of scams like the Bitcoin Code that proliferated throughout social media in countries like Germany in 2018.
wall street market
Previous ArticleBitcoin Market On The Rise Again, BTC Volatility Decreases – This Is The Perfect Time To Invest In CryptoNext ArticleCrypto Milestone: Bitcoin (BTC) Trading Record, Broken In Latin America