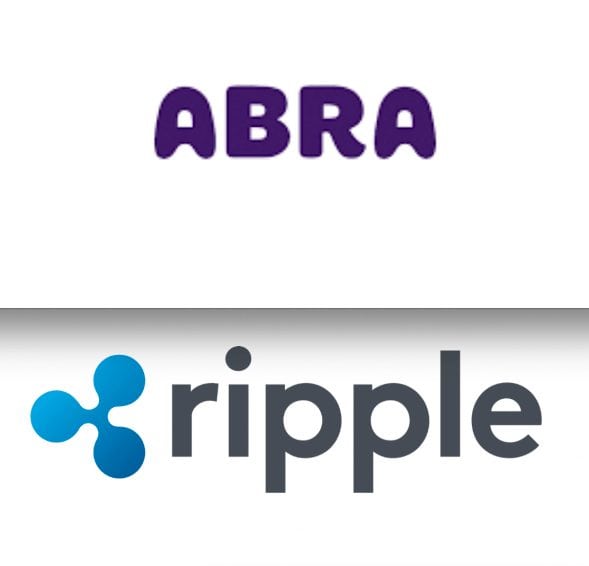 Ripple (XRP) – Coin who? Ummm, when it comes to XRP finding more and more examples of use case and listing on exchanges, the two words coin and base are getting more and more meaningless, and silly. As the San Francisco exchage Coinbase—which lists only 4 cryptocurrencies—continues to struggle with public ethos amidst two consumer protection lawsuits—the once clear appeal of XRP finding a listing on that site seems like more and more of a bad idea.

Especially with breaking news that XRP has just been added to Abra’s first worldwide accessible wallet exchange, which touts twenty coins that can be purchased in 50 fiats, as well as by American Express credit card. The Abra app is available at Google Play and at the iOS App Store.

Being listed on Abra’s worldwide wallet application is yet another recent feather in the cap for XRP, which on the same day was heralded for successful trials in cross-border money transmissions by the international banking conglomerate BBVA Compass—whose reach extends from California to Florida in more than a dozen US sites and hundreds of branches worldwide that serve more than 72 million customers.

So despite XRP’s current valuation at 65 cents per coin amid an extremely overall bearish cryptocurrency market, news for XRP is popping, and pretty much at an astounding rate.

Abra is a Mountain View, California financial services company that produces a peer-to-peer mobile payment system (phone app) by the same name, and uses blockchain technology to store cash deposits and facilitate cash transfers between smartphones. The company announced that today XRP would be integrated with full functionality to the Abra application, as well as service for nineteen other coins, including Dogecoin (DOGE), OmiseGo (OMG), and majors such as Ethereum and Bitcoin.

Abra users can withdraw and/or deposit cash with individuals or businesses known as “Abra Tellers”. A bank account is not needed to use Abra in most countries.

Abra has won numerous awards for designing cryptocurrency applications, and their newest wallet and exchange brings a never before realized functionality to a wide, wide range of currencies. So although Coinbase has in the past been noted for ease of use, Abra has quickly suuperceded the ease of use functionality of Coinbase by integrating both a wallet and an app in one synchronous iOS or Android phone portal.

Add that Abra has one of the lowest fees for this type of service, and that Abra offers a unique peer-to-peer system, the importance of this listing is easily understood.

XRP’s inclusion on the Abra application is reflective of a continuing trend of the cryptocurrency market and world finance organizations to recognize XRP as a major contender that is demonstrating use-case at a higher rate than any other cryptocurrency, having earned the nickname “the smart person’s coin”.

More to come for XRP

The announcement from Abra comes on the same day that BBVA Compass announced its trials of xRapid have been highly successful. The xRapid is the Ripple company’s liquidity system that uses the XRP coin as an artifact for the transmission of currency across borders. BBVA is one of several banks and financial institutions that are following the lead of Cuallix, which is the first financial institution to announce the use of XRP for cross border payments.

With dozens of financial insitutions in the trial stages of XRP for cross border payments and XRP being added to more and more world-leading exchanges that are taking innovative approaches to making cryptocurrency available to the public, the role of XRP in the coming year may play out in ways that see XRP become the dominant cryptocurrency force, bridging the gaps between the cryptocurrency community and the world’s established financial sectors.

WARNING & ADVISORY: I am not a financial consultant and the information in this article is opinion only. I do not suggest speculating in cryptocurrency. I own XRP and other altcoin, but not much and I don’t day trade.