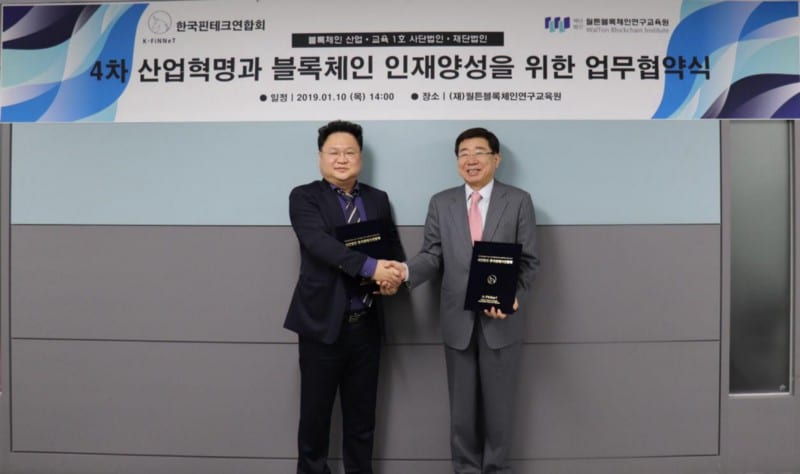 The cryptographic project that merges blockchain technology and IoT to help manage supply chains with RFID, Waltonchain (WTC), has announced an agreement with the Federation Of Korean Fintech (K-FiNNeT) to co-create a blockchain talent education course.

Unveiled today, a press release made known that Mr. Kong Jong Ryul, the President of Walton Blockchain Institute and Mr. Hong Jun Yeong, the Chairman K-FiNNeT on January 10 signed the agreement aimed at producing blockchain talents in the province.

With the intent of heightening blockchain technology, the two parties, through partnership, will offer relevant supports like investment, blockchain talent employment resources, blockchain-related educational and more to startups in the country.

The release added that Blockchain Startup Unicorn Training Course will be the initial project from the alliance, and the allies have also agreed to co-organize seminars, blockchain conferences, employment fairs and other necessary activities that will help promote blockchain education in the region.

While declaring K-FiNNeT delight for the partnership, Mr. Hong said the federation is devoted at producing fintech and blockchain experts. Hong averred that Walton Blockchain Institute regarded as a reliable group that is capable of laying rock-solid premise for the incubation of high-level blockchain talents.

Mr. Kong, in his own words specified that as the world continues to revolutionizing, every country need to produce outstanding talents to stand a competing chance in the world.

“Talents are the fundamental element for all new trends. To effectively embrace the Industry 4.0, South Korean government should provide not only funds for re-education of the existing industrial talents, but also living allowance to make the education affordable”, Kong noted.

Due to the fact that Walton Blockchain Institute is recognized and authorized by the South Korea Ministry of Science and ICT, it was selected as the 2019 New Educational Organization of the Ministry of Employment and Labor of Korea.

However, the provision of public education for job seekers and employees in South Korea stand as the responsibility of the institute.