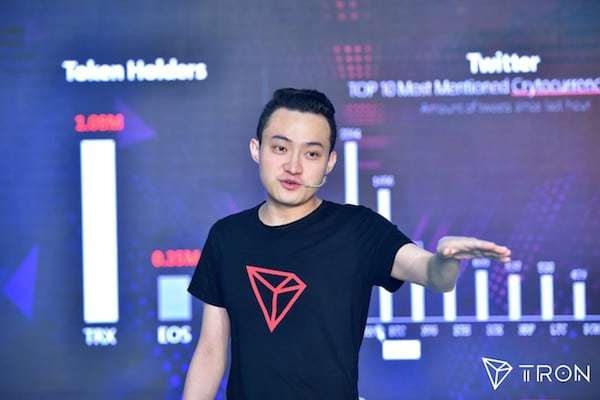 From the launch of Tron (TRX) Mainnet to this period, Justin Sun, the founder of Tron Foundation has been on the neck of Ethereum, finding a means to move developers away from the platform while sending them to Tron ecosystem.

Not long, Justin Sun told developers to move away from Ethereum and shift to Tron blockchain.

Earlier, a popular developer named Afri Schoedon had said the Ethereum network was running out of capacity.

Schoedon’s statement was a result of the overwhelming 60,000 transactions on the Ethereum blockchain as at the time.

Replying to the claim, the co-founder of Ethereum, Vitalik Buterin, said to solve the issue, some DApps could go through gas utilization optimization.

The fact that Justin Sun has unveiled Tron Virtual Machine (TVM) gave him the opportunity to call on developers to move to Tron blockchain.

Justin Sun enticed the developers to move their projects to the platform in an “almost free” manner.

Beyond TVM, in April, Tron Foundation announced it airdropped 30 Million TRX tokens, which was around $1.7 million at that time to crypto enthusiasts having 1 ETH or more.

While people questioned Tron’s decision to airdrop TRX to Ethereum community, the idea could be seen as a means of hijacking ETH Holders.

To Justin Sun, the airdrop was a way of giving back to the Ethereum community. With Ethereum developers coming to Tron, the former would be left with nothing if Justin finally achieves his aim.

After launching Airdrop to Ethereum community in April, Tron then announced last month that it is launching Tron Accelerator program to promote and support developers building DApps on Tron platform.

The initiative has set aside nothing less than $1 million in funding to bring new ideas to the Tron ecosystem.

The move no doubt is an attempt to completely send developers away from Ethereum ecosystem while bringing them to Tron blockchain.

Meanwhile, earlier today, Justin Sun and Vitalik Buterin exchanged banters after, the former accused latter of saying “the next wave of crypto is not going to be built on hype”.

However Vitalik replied: “Heuristic #103: anyone who puts a dollar sign followed by a ticker symbol in their tweet is basically a self-identified shill and not worth listening to.”