IOTA is up huge today at over 70% and now #5 on coinmarketcap after the successful launch of the data marketplace. IOTA now sits behind Ripple (XRP), Bitcoin Cash (BCC), Ethereum (ETH), and the market leader in Bitcoin (BTC). What does the data marketplace mean and why is it driving prices higher?

IOTA partnered with Microsoft, Samsung and Fujitsu to develop and launch a data marketplace that allows firms to sell data on a blockchain market. It is estimated that 99% of all data collected is lost as it cannot be accessed by companies and individuals. Think about the people with weather stations in their backyard, sitting in traffic with a cell phone and making purchases at a store. The weather station monitors wind, temps, humidity etc that might be important to a farmer or large farming conglomerate for local weather information. Waze or Google may want instant traffic information which can be gathered from the GPS on your phone. Local companies may be interested in targeted marketing to customers who purchase certain items or shop in certain stores.

All this data is collected through various means but often in-accessible by most. Until recently only direct connections to the collectors could arrange a transfer of data. IOTA and the IOTA foundation, a German non-profit, has set up an open market place where the data can be placed for sale. Finally a chance to monetize all the data Big Brother collects on us. Like Ripple (XRP), IOTA is part of the second generation of the blockchain economy and poised to stay in the top 5 in market value.

Microsoft is one of the largest companies in the world and headquartered in the United States. Samsung is the largest company in South Korea and a top 10 technology company. Fujitsu, while much smaller in market cap than Microsoft and Samsung, is still inside the Forbes 500 and headquartered in Japan. While smaller there are also many other companies from the energy industry, investments, and large conglomerates like Bosch that are also partners in this project. IOTA foundation believes that data is the new oil.

The IOTA project is open source. Anyone with data can list that data on the market place. Large corporations have been collecting data since the invention of the computer but to date have not had many options for turning data into revenue. The IOTA blockchain allows that data to add additional revenue to classic revenue streams.

Amazon has the purchase history of millions of people all over the world. It knows how often to make regular purchases, which credit cards you use, addresses, friends, family, browsing history. Google is the same. This is what creates Amazon recommendations and Google Adsense including the ads on this website. While Amazon and Google have been able to benefit from internal Data, now they can increase revenue by placing data on the market for sale. Smaller companies can then benefit from the same marketing tools used by the largest companies in the world.

The IOTA Foundation forecasts the big data marketplace to grow worldwide to $92 billion by 2026. For the next 2 months IOTA says there are several dozen participants on the limited release market in testing before opening the market to a wider public release. IOTA has a vague roadmap but no dates as the focus and goals are ever changing and largely created from the partners a 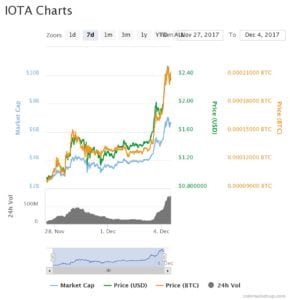 This chart is impressive. This is 7 days and over 100% growth for those who were in before the blast off. The next two months with the limited market may cause a quiet period but the the future launch of the wider market coming this chart may just continue the upward movement.

Now at #5 in market cap for crypto currencies, IOTA has now entered the big time with Ripple (XRP), Bitcoin Cash (BCC), Ethereum (ETH) and Bitcoin (BTC). Of the four, IOTA is similar to Ripple in that it is part of the coming second generation of the blockchain economy. First a business/foundation which is looking to utilize the blockchain to revolutionize an industry. With 2/5, what will the next second generation crypto company be to knock off a first generation coin? Perhaps Connectjob.io could be that company. Head over to our review to check it out.