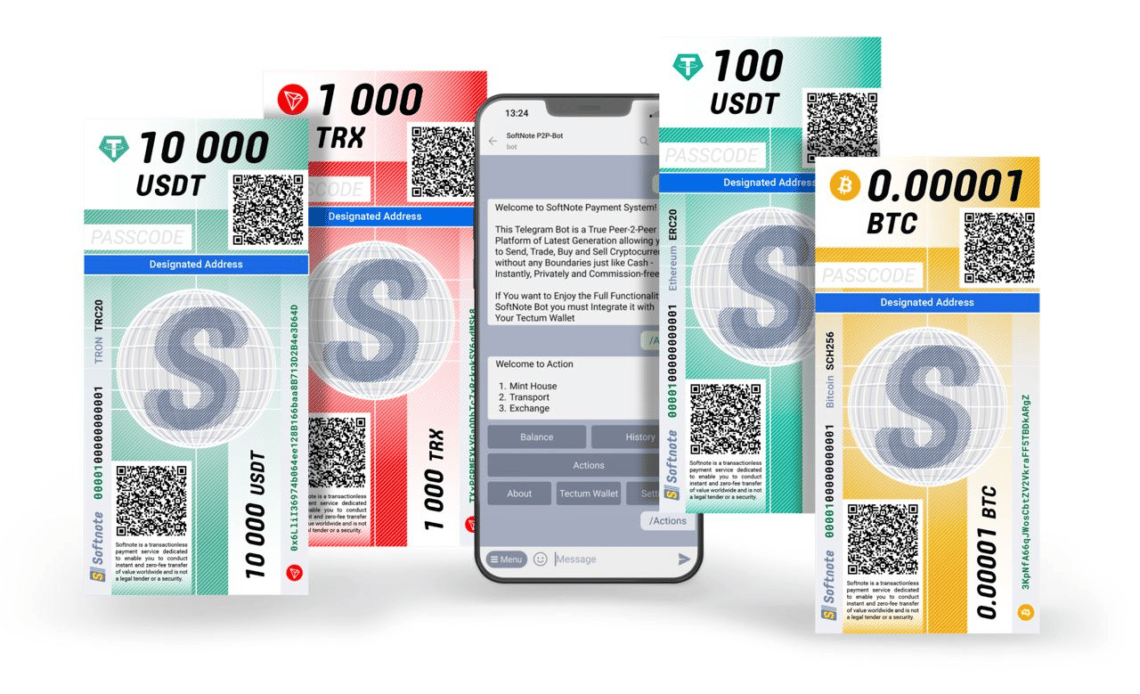 Press Release: Softnotes are a revolutionary new Bitcoin scaling solution network and have the power to finally transform Bitcoin into the ‘Peer-to-Peer Electronic Cash System’ that Satoshi envisioned.

October 12 2022, Illinois, US: Softnotes overcome all the scaling issues of the Lightning Network that have thwarted its progress in El Salvador. They enable feeless, private, instant, and decentralized Bitcoin micro-payments without the Lightning network’s trade-offs and complexity. Softnotes make it easier for merchants to accept Bitcoin and are enabled by the world’s fastest blockchain, a new layer-one blockchain protocol that processes over 1 million transactions per second.

Tectum’s community presale has begun giving community members and retail investors the chance to be involved in an innovative new project that has actively avoided seeking Venture Capital funding. The Tectum blockchain has been under development by a team from Chicago for several years and is fully live right now. Tectum’s flagship product is the Softnote.

Softnotes allow Bitcoin to scale to unlimited transactions per second (TPS). They are a radically new way of thinking about Bitcoin scaling, which involves transferring ownership of Bitcoin wallets in a hyper-efficient way rather than batching transactions on a layer two chain like the Lightning network.

Bitcoin’s maximally decentralized architecture makes it resistant to economic and technological coercions and attacks. It’s a gold-like store of value and bearer instrument. Satoshi also intended Bitcoin to be a medium of exchange. The medium of exchange function has historically been its greatest weakness, with the security and decentralization aspects of Vitalik Buterin’s ‘blockchain trilemma’ prioritized over scalability.

Forks of Bitcoin with a heavier emphasis on scalability, such as Bitcoin Cash, have had little success due in part to their weaker network effects and security, meaning that the Bitcoin community turned to the layer two solutions, the ‘Lightning Network’ to speed up Bitcoin’s 7 TPS woes. The Lightning Network, while ingenious in its design, has proved overly complicated in its execution and has not gained traction, particularly with merchants and those lacking technical expertise.

A perfect Bitcoin scaling solution would be cash-like and have the following properties:

This Bitcoin scaling solution already exists; as of October 2022, it is fully live! The solution is called the Softnote and is a revolutionary re-imagining of how scaling can work. Instead of batching transactions like typical layer twos, the Softnote enables ownership of a Bitcoin wallet, pre-filled with a defined amount of liquidity, to be transferred at lightning speed using the Tectum blockchain. Once handover of the Softnote QR image with a six-digit pin are made via email, mobile, or even printed on paper, the new owner secures their ownership cryptographically by entering the pin into the Softnote platform, and a new random pin will be generated known only to them. Since this handover has taken place off-chain, it is virtually frictionless, untraceable, and anonymous.

At this point, the new owner has immutable ownership and control of fully liquid and secure Bitcoin tied to their Softnote that can be used in further Softnote transactions. However, suppose they decide to move the underlying Bitcoin liquidity out of the Softnote. In that case, the Softnote can be burned, and the private keys associated with that Bitcoin wallet will be returned to the Softnote owner.

The Softnote platform is powered by the new third-generation Tectum blockchain, which has a specialized three-tiered DAG-like architecture that allows for phenomenal TPS and near-instant transaction finality. Tectum’s consensus mechanism is known as ‘Proof of Utility.’ It enables Tectum to operate at over 1 million TPS, making the chain perfect for applications in a distributed IOT context and hosting the Softnote platform. In addition to insane speed, Tectum’s other killer application is its functions as an ‘overlay network’ to the Bitcoin main chain and has its in-built Bitcoin node. This means that providing liquidity to Softnotes is as frictionless as possible and optimized for maximal BTC transaction fee efficiency.

Tectum’s native token ‘TET’ is hard capped at 10 million, and TET’s leading utility is that it is required to mint new Softnotes. The presale price per token is $3.00, meaning that with a 10 million hard-capped supply, the market cap stands at $30 million, which most investors familiar with the crypto industry will agree has vast upside potential in the context of comparable layer one projects. In the past seven days, the company has enabled its beta test application for minting softnotes on the ‘telegram’ platform. Since then, over 480,000 Softnotes have been minted by the community. You can participate in the presale of TET by going to tectum.io.

The entity behind Tectum and the Softnote platform is Crispmind, a Chicago-based software development firm with a team highly focused on both quality and community engagement. Join our weekly live AMA (ask me anything) sessions to speak to us directly, or visit Tectum.io to learn more about the inevitable Bitcoin scaling solution.