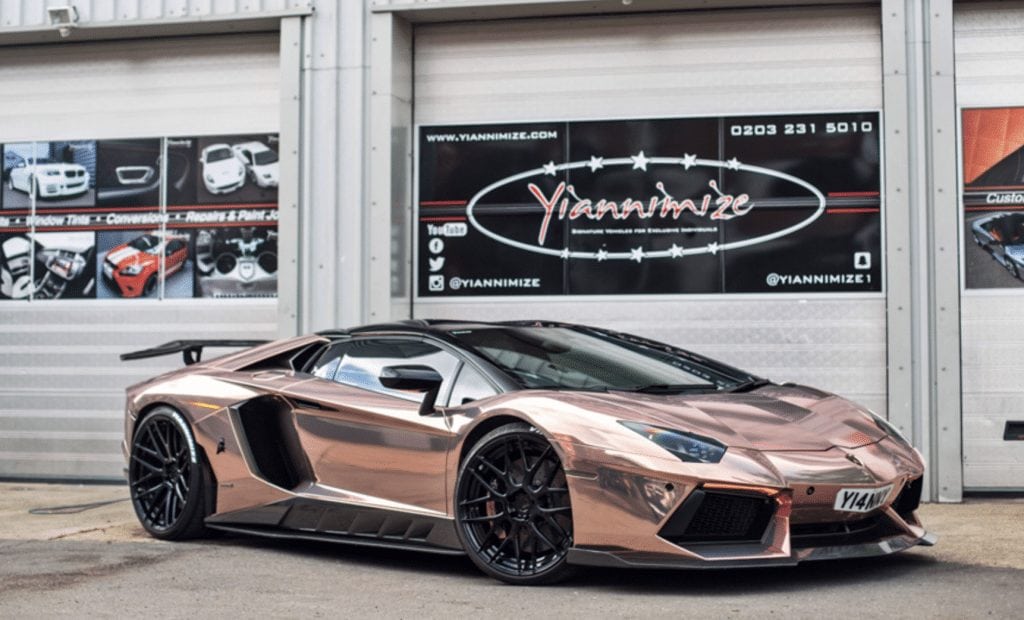 Sponsored Post – London’s leading bespoke car customiser is providing its customers with an innovative alternative payment method for their services by accepting all types of cryptocurrencies.

Yiannimize is a London-based firm with more than 20 years of experience in the customisation of sportscars and supercars, from vehicle wrapping and conversions to leather interiors and a whole lot more.

With a focus on pushing the creative boundaries and delivering head-turning results for its clients, the company is acknowledging the surge in popularity of cryptocurrencies, particularly Bitcoin and Ethereum, and has subsequently created a cryptocurrency wallet to receive instant payments online.

Operating out of Enfield, North London, Yiannimize utilises the very best materials and the most competent professionals to offer refined customisation services for vehicle owners from a variety of backgrounds.

The company is regularly entrusted with customisations of supercars owned by celebrities based around the world. From celebrity chef, Gordon Ramsay and Hollywood actress, Eva Longoria to Manchester City footballer Sergio Aguero and One Direction star, Harry Styles, Yiannimize are well-versed at meeting the demands of the rich and famous. As Bitcoin and Ethereum become an increasingly popular investment asset for high net worth individuals, Yiannimize’s new cryptocurrency wallet will allow those who profit from digital currencies to spend their earnings on transforming their much-loved vehicles.

The brand’s owner, Yianni Charalambous, is a charismatic individual who has become a very popular television personality. His skilled vehicle wrapping services have not gone unnoticed by UK TV, giving Yianni his very own programme on Dave, titled Yianni: Supercar Customiser. The show brilliantly depicts how Yianni and his team cater for his A-list clientele, managing a garage crammed with plush supercars and SUVs that are customised with impeccable attention to detail.

Mr Charalambous said: “With such a diverse clientele, many of whom are celebrities and high net worth individuals, at Yiannimize we want to make it as easy as possible for our customers to pay for their bespoke vehicle services. Cryptocurrencies are becoming big business and we’re delighted to allow our clients to pay quickly and securely using their shrewd crypto investments.”

Car wraps can change the look and feel of a supercar entirely. It’s not a permanent colour change as the original colour remains underneath. The wrapping can be removed at any time but, in the meantime, it also provides beneficial protection for the original paintwork of the vehicle.

Yianni’s idea for Yiannimize occurred when he was introduced to former Arsenal footballer, Bacary Sagna. The Frenchman asked Yianni to wrap his sports car and his Arsenal teammates and other professional footballers soon wanted to have their vehicles similarly customised. The snowball effect of celebrities recommending Yiannimize has enhanced the company’s presence on social media. The brand’s Instagram channel has over a million followers, while Yianni’s personal account also has over 300,000 followers.

Yianni’s passion for customising supercars stems from his own love of cars. He owns a Lamborghini Aventador S, as well as a Range Rover Velar Urban; both of which have the ‘wow factor’ and turn heads wherever he goes.

Some of the team’s most elaborate bespoke supercar customisations include a wrapping for a £2-million McLaren P1, which was covered in rose gold-coloured material for a truly luxurious and indulgent finish. A £1.6-million Pagani Huayra has also passed through Yiannimize’s garage doors.

The Yiannimize workshop consists of three distinct departments: the strippers, which work to carefully strip down the supercars ready for new wrapping; the wrappers, who are considered the master craftsmen, with the vision and imagination to take vinyl wrap and mould it perfectly around the bodywork of even the most powerful cars; and the juniors, who are working hard to pick up the tools of the trade and keep the garage clean for its A-list clientele.