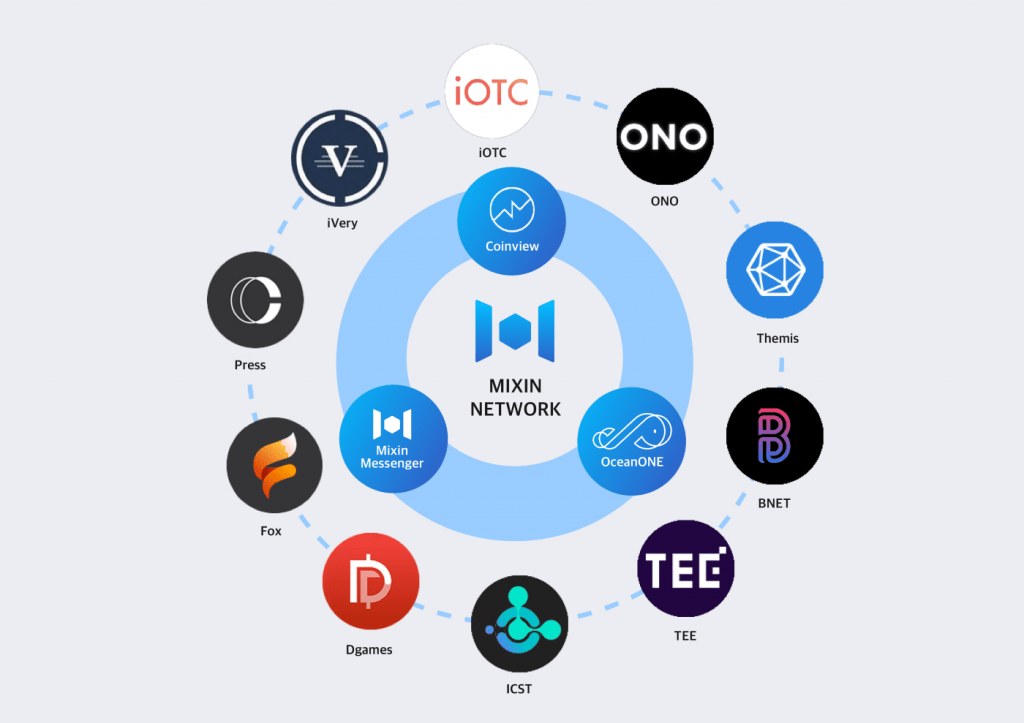 This is a Smart-Contract Network designed to facilitate peer-to-peer (P2P) transactions with digital assets across the blockchain.

Mixin Ltd was created in Tokyo in 2013 launching later in 2017 the Mixin Network.

Mixin Messengerhttps://mixin.one/messenger was the first dApp created on the Mixin Network – and yes it a Blockchain created competitor for the Facebook Messenger. Although it adds the astonishing feature of having a Multi-Currency Mobile Wallet.

When  The Mixin platform came out was meant to be a dual layer smart contract network to sync with Bitcoin. Something like Light Network.

But the developers expanded it in order to work with other cryptocurrencies and blockchains like Ethereum and EOS.

On a simple way, all transactions are distributed as 3 different sets of Ghost Data, to “lose them in the crowd“. Easy to compare to how a secure building uses white noise to keep conversations more private and untraceable.

The project focuses the aspect of adding Cryptocurrency Transactions to Mixin Messenger. Built also on the platform is OceanOne Exchange https://medium.com/mixinnetwork/oceanone-exchange-3-0-96100bb16e6e, which greatly combines with the Wallet Built-in the Messenger. There is a direct possibility of transferring XIN between apps.

And like this 2 apps currently there are dozens of them available in the Mixin Network platform, mostly possible to find on the iOS and Android Stores.

Developers are currently working on integrating this small contracts for other blockchains as they did for Ethereum and EOS.

Major advantage on the dApps – customer and developers have a very proximate relationship – number of Customer Reviews is huge and we can find the developers always listening to them and integrating them in the Road Map.

Mixin in the Market

In the last 24 hours we have an astonishing $41,568,512 USD Trading Volume. Which is really impressive for a Coin that stands bellow Top 200 of the Coin Market Capitalisation.

Another detail is the fact that on the 24th of March Mixin (XIN) was with a Trading Volume of $4,000,000 USD, which means that in less than 1 week it grew over 10 times. Going in favour of a Bullish Movement that I found already in another Cryptocurrencies as well in the past few days.

This is a Network that proves to be very useful in the Asian Market, and thanks to that XIN has huge Daily Trading Volumes. Its price went so High 2 years ago and keeps itself stable, even during this difficult times, because of all the Funds that were backed to it. Since it is a Huge Network, all the Companies that develop in it also fund it or invest in it, in order to make it better.

Obviously this is not only good for the Developers but its great for the Network as well.

I do see Mixin (XIN) as a Sleeping Giant of the Blockchain Industry. It needs to grow in order to fight its huge competitors, although if everyone in its Ecosystem keeps working in the same direction. We will most probably be talking about this Cryptocurrency in much more years to come.