cryptogazette has nothing but respect for the Monero project we have chosen to run this article to be transparent. The source is someone named Cliff.

“Monero has been making extraordinary claims about one of its developers – Source https://moneromonitor.com/episodes/2017-04-10-Episode-002.html

Howard Chu (https://github.com/monero-project/monero/commits?author=hyc) claims to have saved a space shuttle launch. Details vary from one place to another but here it is from the horses mouth –   https://www.facebook.com/notes/howard-chu/my-space-shuttle-story-for-catherine/109922698035/

We contacted a senior NASA engineer, Ed Caro, to confirm his story. It turns out that Howard Chu has been passing off an embellished version of his older brother’s career as his own.

He is happy to go on record. Here is a direct quote – “Oddly, no one who was directly involved with the SIR-C missions and currently still working the Lab, remembers the name Howard Chu except for one who vaguely recalls Eugene Chu as having a brother named Howard”.

You are welcome to contact him. He would appreciate if you talked a bit about SIR-C radar in your article, he is very passionate about his work.”

Update: Eugene Chu contacted us, here is what he said:

The title of this article is false; Howard Chu did nit fake his CV with my career.

Howard did excellent work for the SIR-C project, not all of which was recognized because he did not conform to the expectations of the management.  Even they had to admit that Howard did a “very impressive” job of replacing the functions of the hardware DQA with his software.

I have sent email to Ed Caro for clarification.  But there are other managers who witnessed Howard’s work first hand, and I will be getting in touch with them. 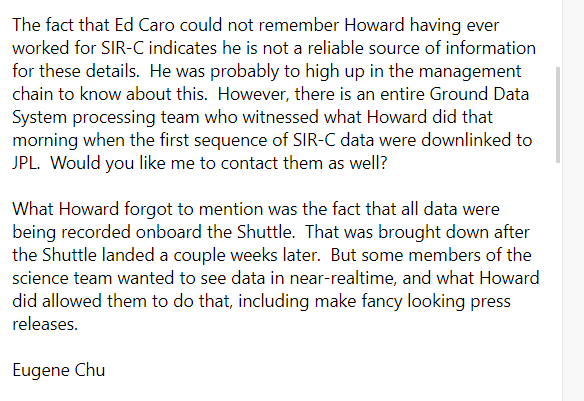