NANO (NANO) – What is NANO? Launched on February 29th, 2016, NANO is a proof-of-work that uses the Blake2b hashing algorithm. Complex algorithms combined with cryptography and a public ledger allows for us to make payment transactions without banks. As the transaction ledger grows this process becomes more expensive and inefficient. That’s where NANO comes in. NANO works without a mining process and allows transactions of any size to be processed instantly with no fees. There is no limit to how many transactions can occur simultaneously. This coin is designed to function on a global scale ands bring cryptocurrency to the masses.

Earlier this week the price of NANO was sitting at $7.00 and most people assumed the price would keep declining. To their surprise the cryptocurrency has more than doubled since then and is now trading at over $15.00. While most of the cryptocurrency market is plunging downward, this specific coin seems to be doing the opposite. However, the market seems to been an uptrend today. This weekend saw a lot of coins in the red – with the exception of NANO.

Over the past 24 hours, the NANO/BTC ratio has improved over 40%. The cryptocurrency has a market cap of over $2 billion ranking it at number 22 on Coinmarketcap.com. 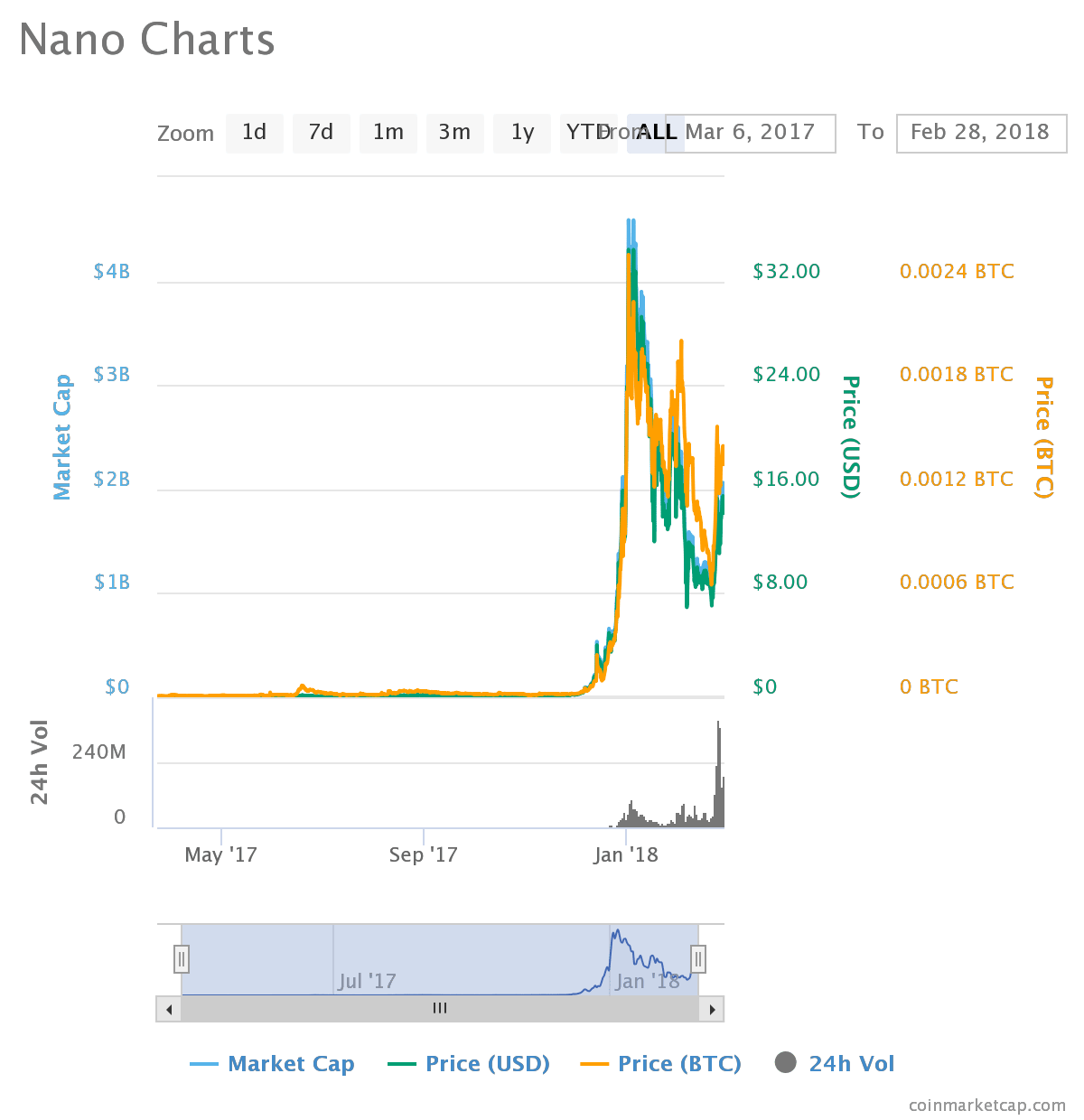 Just a few days ago, the NANO coin was trading with a 24-hour volume of roughly $100 million. Now, the 24 hour trading volume is upwards of $350 million. It is unclear how high the NANO price will go before this momentum reverses. This trend has remained in place for a few days in a row now and it is possible to see some development occur. Reaching $20 seems almost impossible right now, but then again, just last week, people thought $15 dollars was a long shot for NANO.

NANO’s 72% bull run three days ago made headlines. NANO’s ability to confirm transactions instantly with xero fees and no scalability problems one thing that is catching the eyes of crypto enthusiasts around the globe.

While most of the market is in a downtrend with hints of green glowing here and there, NANO headed upward all weekend. It is evident that the future holds some serious movement for all cryptos but as of right now Bitcoin and Ethereum head downward while NANO is making its mark as a promising coin.

It seems like there is always some rumor going on about Coinbase adding more cryptocurrencies to its exchange. And as if this wasn’t already the most accessible platform for investors to use, Coinbase is implanting a merchant gateway. NANO is one of the cryptos that would easily make this achievable. NANO’s free fees would make this coin the perfect addition to the exchange. Some believe that this bullish activity of NANO is a sign that Coinbase is accumulating the coin and preparing to launch it on its platform.

Whatever the reasoning is behind this price surge, it looks certain that the future of NANO is bright. If it does get added to Coinbase, volume will surge, and people who never heard of NANO will start to get interested.

Garry Tan, one of the earliest seed investors in Coinbase,  sees pig potential in NANO. He posted a video on his twitter of a very exciting moment not only for NANO itself but for the whole cryptocurrency community: A NANO transfer to an Android mobile wallet.

We always hear these things about coins. How quick they are… How cheap their fees are… But none have actually shown us the proof until now. NANO is doing everything that their team set out to accomplish. We can see this coin potentially hitting $20 within the next couple of days. NANO has potential to be one of the bigger players in this market.