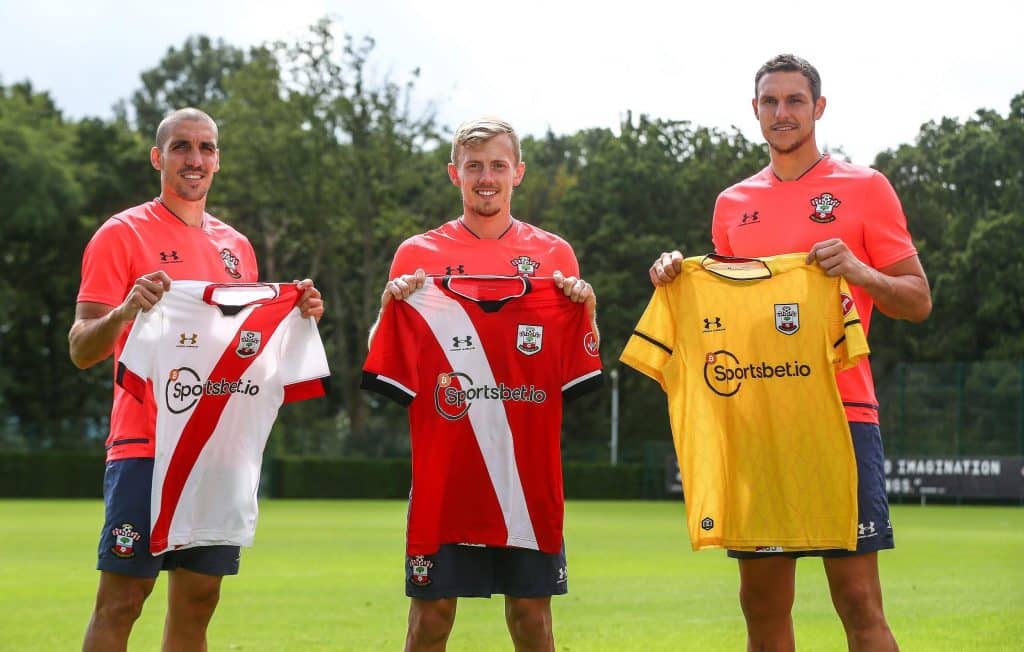 A recent announcement by Southampton Football Club will leave some fans with a little bit of drama about their recently purchased 2020/21 home, away or third shirt merchandise, as the old Chinese branding partner LD Sports will no longer be responsible for the t-shirt branding.

Instead, a rapid negotiation deal now means that crypto sports book Sportsbet.io will take over.

A New Partner On and Off the Field

In the past week, Southampton FC had tried communicating with LD Sports to determine if the contract would be continued, however, all efforts proved to be abortive, leaving the Southampton bosses to make a drastic change in just over two weeks before the new season begins, by choosing leading Coingaming Group’s sportsbook Sportsbet.io as the new branding partner.

The new partnership will place the Sportsbet.io brand on the front of the first-team and Under-23 shirts with Sportsbet.io brand name. And the sportsbook platform may have a huge community role to play as the season kicks off as they work together with the club to provide the best possible solution for those fans who wish to show their support to the team with updated replica shirts.

Southampton FC seemed confident about the coming season despite being faced with what would seem as a setback for the ambitious club, suggesting that everyone in the club is looking forward to what may be a strong season for the club. They however, plan on working with Sportsbet.io and their local fans to promote the club in the upcoming year.

As it stands, the club has suspended all production and sales of the home, away and third kits, while apologizing to fans who may have ahead of this new initiative bought those branded by the former partner LD Sports. The club said, through Southampton Football Club’s Chief Commercial Officer, David Thomas:

“The club has also taken the difficult decision to temporarily halt all sales of home, away and third kits. Fans who have already purchased a 2020/2021 home, away or third shirt with LD Sports on the front are asked for their patience and understanding at this time whilst the club resolves what is an extremely complex situation and sources a solution for updating their shirts.”

With regards to this new partnership, CEO and co-founder of the Coingaming Group, Tim Heath, said:

“We are absolutely thrilled to announce this sponsorship deal with one of the Premier League’s most ambitious teams. Sportsbet.io shares the club’s desire to disrupt its industry and increase its global reach. We’re proud to be able to contribute to the Saints and support such a prestigious team which has been around for nearly 135 years!”

Coingaiming’s Sportsbet.io remains a leading industry Bitcoin sportsbook, as it has redefined the online betting space using cryptocurrencies. And by optimizing gaming experience through its incentive mechanism it has been able to retain its players in a fun, fair and entertaining manner.