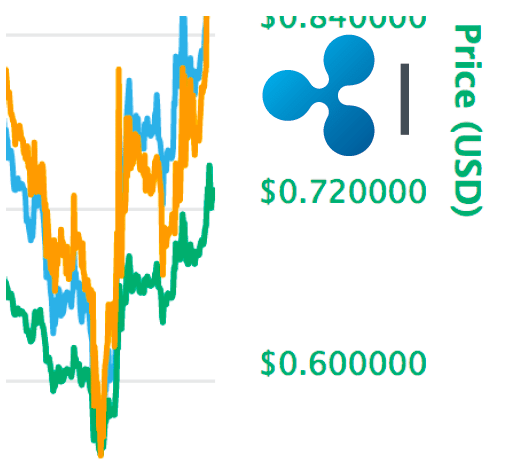 Ripple (XRP) – Monday was one of the worst days in months for Wall Street, which saw sharp drops in indexes across the board—so sharp that some industry analysts are predicting that a nine-year bull run for Wall Street profits is finally ending. Monday’s fall was so severe that it left the DOW Jones Industrial Average in the negative for the entire year—erasing what had to this point been a stellar performance for stock exchanges.

Most every crypto analyst has attributed Wall Street’s 2017 rush into the realm of cryptocurrency trading as the reason for the unprecedented surge in crypto values at the end of 2017—a span of about eight weeks when just about every alt-coin out there surged in value from 1,000 to 3,000 percent.

As alt-coins spiked, stocks busted. The end of December 2017 as a whole was a bust  for Wall Street, seeing the biggest losses the industry had seen that year. When the bulls stop charging, day traders dump and take their profits elsewhere. Most likely, Wall Street’s end of the year bust had everything to do with the cryptocurrency rush that sent alt-coin values soaring.

But what one is given can also be taken away. And that adage goes true for Wall Street, as most cryptocurrency analysts have surmised in blaming Wall Street investors’ and their crypto-dumping for the ensuing cryptocurrency crash that started in January 2017.

True to the speculative form, when crypto started dipping in January, Wall Street started ripping, taking the stock markets on a wild ride ever since. As January was one of the worst months ever for crypto, it was one of the best months in all of history for Wall Street.

From just about the time that cryptocurrency started falling in January 2017, Wall Street regained a nine-year bull run that saw 2017 increase about 25 percent across all indexes including the Nasdaq, the DOW, and the S&P 500.

But the Wall Street nine-year bull run looks like it might finally be coming to an end—bringing speculation in the cryptocurrency world that Wall Street will take crypto on another ride, a theory that the signs in the market seems to be supporting. Crypto, now in the green, may have more to thank than the news that the G20 might take a non-intrusive stance on cryptocurrency. Crypto might just also be benefitting from Wall Street investors who are dumping their stocks and re-investing in crypto.

WHY XRP FOR WALL STREET

News about cryptocurrencies was key in their rising valuations at the end of 2017. One after another, as media reported on cryptocurrency use cases, their values skyrocketed.

In this world of use-case for crypto valuation, XRP was center stage at the end of 2017. As Ripple announced that Western Union, MoneyGram, and other financial entities were trial staging xRapid in their services, XRP spikes correlated and skyrocketed.

In the last few weeks, however, announcements from Ripple that XRP has gone live with Cuallix, the Mexican finance service, has passed successful trail stages with banks, and has been added to more and more worldwide exchanges has not brought the cryptocurrency the rise in valuation that it deserves. Wall Street investors however generally make decisions based on real-world validity of their investments—at least as much as can be perceived. The occasional QWEST Communications and Enron scams make their way into the mix, but they make their way because of news, however, fake that news might be.

But XRP is no wooden nickel. It’s a cryptocurrency that is already being used in the finance sector, and has been confirmed for its success at bridging cross-border payments faster and cheaper by major financial systems.

If Wall Street is making its way back into the cryptocurrency world, look for XRP to be one of its shiniest rising stars, if not the brightest. With the Ripple team making back-to-back appearances at financial conferences and media interviews around the world, the news of XRP’s use-cases and long-term goals are finally being recognized and understood by the investment world. And the next few weeks may just reveal how strongly XRP is being perceived by Wall Street.