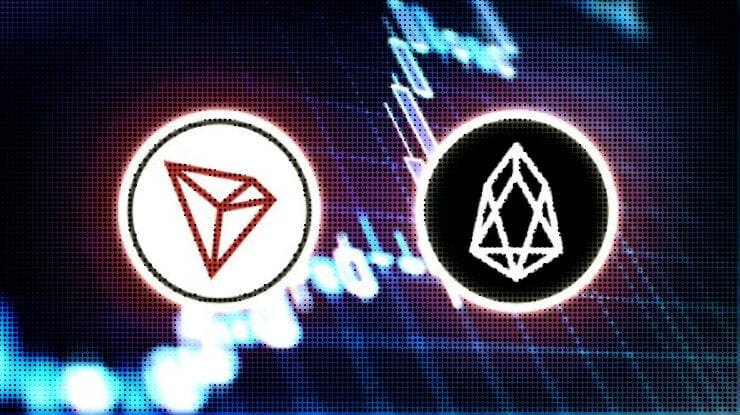 Tron and EOS dApps look to have flattened Ethereum dApps as they were both able to surpass Ethereum in terms of the numbers of dApp transaction volume and Justin Sun declares that this is just the beginning.

It is enough to surmise that these two blockchain platform are out to get Ethereum and they might just succeed.

Tron and EOS not Relenting.

Both Tron and EOS were at inception built on the Ethereum platform but have since migrated from it with the launch of their individual mainnets.

EOS, an open-source distributed blockchain operating system has the goal of bringing decentralized apps to the masses. The vision of EOS is that in the nearest future, everyday users will be able to run dApps from their mobile devices without any prior specialized knowledge.  In the same vein as they can currently download apps from App store.

Since its launch, EOS has grown more than expected. With Mutable smart contracts, trade-offs made, 21 mining modes and lots more coming with lots of criticism from decentralization mininmalist,it has not stopped dApps on Ethereum to shift to EOS given the scalability they enjoy on EOS.

Tron Network has been aggressively expanding despite the bearish market trend this year. After its acquisition of BitTorrent, the pioneer peer-to-peer network, Tron went on to acquire payment app, Poppy. Recently, their discussions with Chinese internet giant, Baidu resulted in collaboration on cloud computing services between the two.

In a bid to keep the network momentum up and encourage more growth, Tron launched an accelerator program for dApp developers. The initiative which is in the million dollar range is targeted at empowering developers and fostering innovation within the blockchain industry.

According to the Tron website, the registration and submission of dApp projects for the accelerator program will be accepted up till the end of the year with the winners announced in January. Up to 56 Dapp projects will be reviewed across multiple categories.

The twain of EOS and Tron announced its independence at about the same time and both crypto had promised to revolutionize various part of the industry. They attracted the public with a promise to decentralize practically anything. It is therefore no wonder that these two blockchains are one of the most closely monitored projects this season. It is therefore apparent that they both have to raise the bar of public expectation to a very high place.