One of the strongest but yet little-known cryptocurrencies that has show one of the highest resiliences in the crypto market is launching a correlative crypto product to a thunderous symbolism—as VeChain (VEN) will soon be officially known as VeChain THOR (VET), adding to its use case the symbolism of the Nordic god Thor, the hammer-hefting god of lightning and thunder who is associated with loyalty, honor, and great power. Whether this power and loyalty will be transferred to the cryptocurrency VEN as it rebrands to VET remains to be seen, but should be expected.

Although VeChain has announced that today is the official launch date of VeChain THOR, the coin VEN has not been re-listed as VET yet by Binance, coinmarketcap.com, and other exchanges and cyrpto-market sites as of press time, but this change may take some time as the public is educated about the VeChain to VET rebranding.

The cryptocurrency VEN has in fact shown god-like power in the last three months, moving from $.24 USD in November to $5.16 USD as of February 26, 2018—a spike of more than 500 percent. This rate of growth positions VeChain in the top five percent of cryptocurrencies for valuation in this time frame. It’s an astronomical appreciation that dwarfs Ethereum and Bitcoin’s for this time frame. 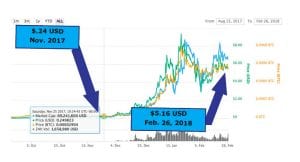 The reason for the incredible growth is something that is always hard to nail down in the cryptocurrency market, but VeChain promises a use case that is different from coins meant to simply speed up transactions or meant to hide purchasing history. On the contrary, rather than being a dark coin such as Verge (XVG) that is meant to hide transaction history, VeChain is known as something called a white coin, a coin that’s meant to increase the transparency of transactions, especially for luxury goods, by building “a trust-free and distributed business ecosystem to enable transparent information flow, efficient collaboration, and high speed value transferring.”

The possibilities of this use case have so far reached the highest zenith in VEN’s partnership with BMW, which was announced just hours before the scheduled rebrand on VEN to VET.

VeChain (now VeChain Thor) has also recently announced that its working with Oxford University which will be part of the VeResearch project, aimed at assisting in the development of the Thor platform. Add to this that yesterday Coinnest, the South Korean cryptocurrency exchange, added VeChain to its trading platform by offering a direct fiat to VET pairing, and the resiliency of VeChain can be easily understood.

The theory goes that VEN can be used to establish the authenticity of goods, a  much-desired application in the luxury goods economy. When customers pay high dollar for items such as purses, perfume, or sunglasses, establishing authenticity is not possible through traditional purchasing currencies. Also, VEN promises to be valuable in the food service industry, where being able to trace a product through the supply chain for food safety issues is now a complex and sometimes impossible task.

There is a caveat to the application of VEN to this use for supply-chain transparency, however, which is that in order to establish authenticity, these products will also have to be distributed with microchips. So apparently VEN as a coin does not offer an end-to-end tracking capability in the supply chain of goods, but is merely one component in the supply-chain tracking capabilities that VEN promises.

VeChain THOR promises to extend the use-case application of VEN by allowing it to be used in smart contracts much in the way that Ethereum is used. THOR, although a separate product from VEN, cannot be bought independently, but must be acquired by staking VEN in a wallet through the use of the VEN masternode. More information and instructions for this process are available at the Thor Calculator website.

VeChain’s blockchain then will run on a two-coin system. THOR will be used to support the blockchain and to execute smart contracts on decentralized applications. THOR will be able to be generated at a minimum rate of .00042 per VEN, and these transactions will be validated by large-stake VEN holders.

It might be hard to imagine that the incredible resiliency of VeChain could in fact improve. But amid the rebrand of VEN to VET, the BMW and Oxford University partnerships, and the addition of THOR acquisition through masternode, increased resiliency is highly probable for a coin that has added the protective symbolism of a powerful Nordic god to its name while expanding its transparency use-case application to smart contracts as well.