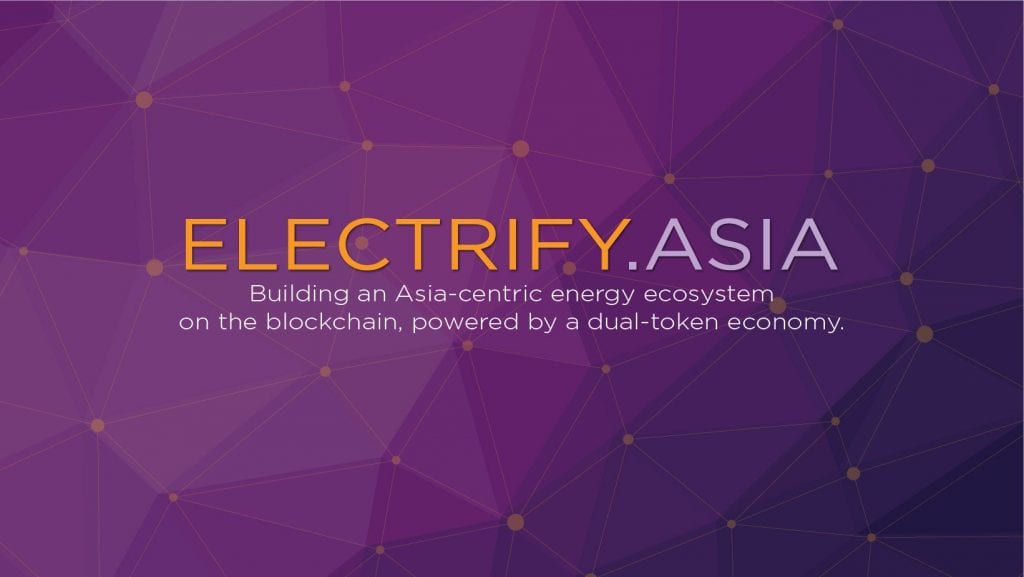 Electrify Asia is an initiative that was launched in Singapore in July 2017 and aims to provide affordable energy to the Asian area by cutting out the middleman by using the blockchain technology of Ethereum.

Around 60% of the world’s population live in Asia and almost half are connected to the central power grid. As more countries open up their energy markets to the private sector, there is the opportunity for initiatives such as Electrify to step in and revolutionise the power sector. With the energy demand in this region predicted to double by 2030, it is vital that innovative, sustainable ways of producing power are developed.

ELECTRIFY plans to develop a decentralised energy marketplace that runs on the blockchain.

As an improvement from the existing marketplace business in Singapore, the new MARKETPLACE 2.0 will allow anyone to source for energy from commercial energy suppliers or to buy directly from a private producer
via ELECTRIFY’s peer-to-peer (P2P) trading platform, SYNERGY.

Electrify Asia allows the consumer to buy their energy directly from the producer, through a platform called Market 2.0 which can be accessed through the web or on mobile phones. By allowing the consumer to purchase their energy wholesale they have access to estimated savings of 20%. Electrify provides a tailored service for businesses where they are advised on the best plan, based on energy consumption patterns. The consumer will have much more choice in their energy provider which gives greater opportunities to purchase from renewable energy companies.

There is potential for this project to be hugely successful. A working electricity marketplace has already been set up in Singapore, with 12-16 retailers on it. This marketplace provides a working pilot for the architecture of the company once it moves into foreign markets. Typical savings for customers are between 25 – 30% less than the tariff charged by the Singapore government utility provider. This creates a huge incentive to switch to Electrify’s mobile platform and as the electricity is still provided by the main grid, the quality and stability will not be affected.

The only thing that could stand in the way of this project’s success is its reliance on market deregulation. There is no indication that other countries in South East Asia are moving in this direction. Many countries in this part of the world have their electricity supplied by state-owned services who will be reluctant to allow competitors to undercut them. On the other hand, countries that already have a more open energy market have competing energy suppliers who Electrify must distinguish themselves from in order to be competitive.

The brains behind this project are Julian Tan, who spent five years with Sunseap Energy before founding Electrify Asia and Martin Lim who has over 15 years’ experience as a creative director at a number of different companies. With expertise like this involved in the business, it seems very likely that it will be a success once it expands into the international marketplace. In addition, the Electrify project won first prize at BlockShow Asia 2017 and recently announced a partnership with OmiseGo to facilitate fast, low-cost transactions in Electrify’s E-Wallet. With all this going for them, the future looks bright for Electrify Asia.

Although a fantastic concept, the key to Electrify Asia’s success will be to develop a strong position in Singapore in order to choose the most suitable marketplace with the most favourable electricity regulations to move into.

It’s still extremely early days for Electrify.Asia however we believe they are waiting on technologies such as Plasma due to be released shortly that will give them the room they need to grow further, and who knows what other partnerships they will make in the coming months?