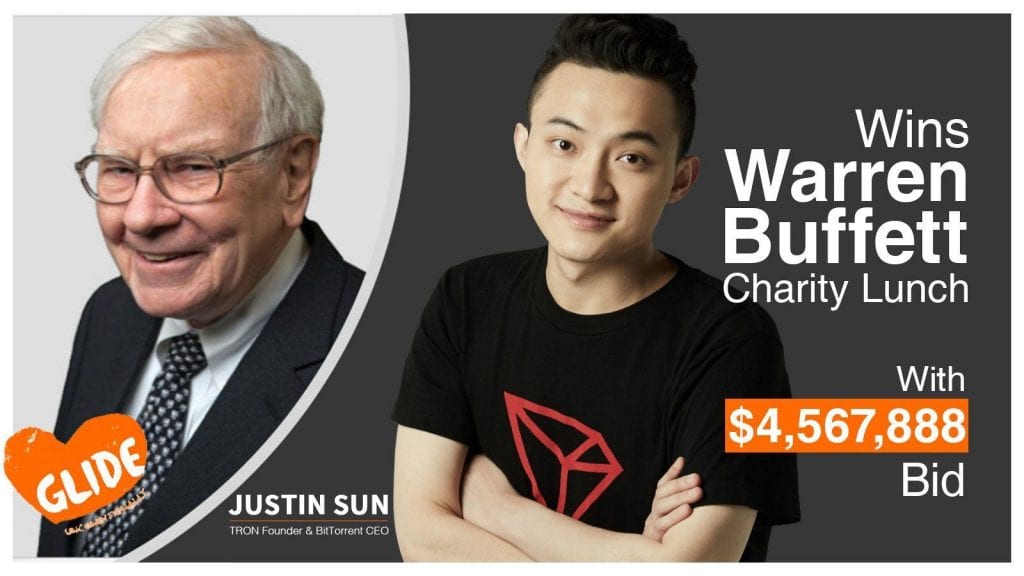 Well, it seems that this is the big announcement that Justin Sun has been preparing.

You may recall that we revealed that Justin Sun triggered massive excitement in the crypto community when he revealed a few days ago that there’s a big win for the blockchain community that will be announced on June 3.

Now, it was revealed via a press release shared with Cointelegraph on June 3 that Sun won an eBay charity auction to have lunch with renowned investor Berkshire Hathaway CEO Warren Buffett.

Cointelegraph reports that Sun bid a record-breaking $4,567,888 to win the charity auction, which has been held by Warren Buffett for the past 20 years.

According to Bloomberg, the winner who was not named before would be able to bring seven friends along for the lunch at a steakhouse in NYC.

All the proceeds from this action will be benefitting the San-Francisco non-profit GLIDE Foundation which is focused on fighting injustice and inequality on behalf of communities in needs and economically deprived.

Sun released a statement to highlight the importance of contributing to a foundation like this:

“BitTorrent and TRON’s US headquarters are in San Francisco, and bidding on this charity auction was a key priority for our team. I’m proud to have my bid donated to GLIDE, a foundation that provides critical support for our local homeless community.”

Here’s Sun’s tweet which people have been waiting with tons of excitement:

Anthony Pompliano said: “Justin DM me. You know you need to bring me along to provide the real life.”

Sun responded: “Sure! Also, to commemorate this, I’m giving away BTC and ETH today. To get it, solve the puzzle: airdrop-now. info Hint: Remove extra space and type this site address in your browser.”

Not everyone was excited after this announcement. Someone commented: “Wait for the next announcement, something like: we finished the dinner, and we are going to have tea, it’s a new era for trx, tea with possibly coffee afterwards… Massive adoption is on the table 😂😂”

On the other hand, Binance’s Changpeng Zhao believes that Justin just made the smartest move for pushing adoption:

Lastly, very smart move for @justinsuntron, now the whole traditional financial industry has eyes on #crypto (and $TRX of course). Who is this #crypto kid? Kudos for pushing adoption, Justin! 👐👍👏

changpeng zhaojustin suntrontrxWarren Buffet
Previous ArticleBitcoin (BTC) Falls To $7,700 After Surpassing $9,000 – The Could Be The Pullback Predicted By AnalystsNext ArticleMind-Blowing Ripple Prediction: Can XRP Reach $589?