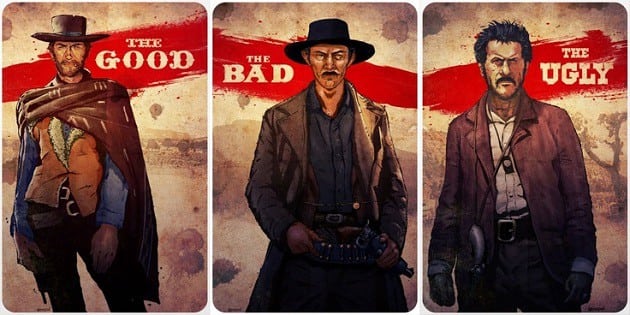 [Photo: Artist representation of The Good, The Bad and The Ugly. Source: Medium.com]

The famous Western, The Good, The Bad and the Ugly, staring Clint Eastwood is a cult favorite for fans of Cowboy movies. It might be an old movie (1966), but the cinematography, characters, action sequences, humor and plain out originality, will probably lead to the Movie entertaining many for decades to come.

In the movie, the three main characters are all motivated by the greed of finding gold coins buried in an unmarked grave in a war cemetery. The Good and the Ugly have an unlikely partnership primarily to get the loot. The Bad, well, he wants it all for himself and uses his gun slinging talents to get what he wants.

Looking at the Crypto-Verse, it is hard not to find congruencies of the coins out there with the characters showcased in this movie. I do admit that the following comparisons are biased but aren’t we all? And especially when it comes to cryptocurrencies.

The coins I put forth as being ‘Good’ are those whose general goal in the Crypto-Verse is not only to have a strong coin in the market and make their owners happy, but they want to change the world using blockchain technology.

Ripple (XRP) has seen many partnerships lately with banks and money remitting services providers such as Moneygram and Western Union. The main aim of Ripple is to ease the cross border transactions around the globe and make them cheaper for the ordinary guys like you and I.

Stellar (XLM) is also another coin and organization that falls in this category of ‘Good Guys’. Their goal is to have a world where everyone has access to cheap, reliable payment services irrespective of their location on the globe. Stellar has even been branded on the internet as being the Crusaders of Blockchain.

Ethereuem (ETH) and Cardano (ADA) fall into this category for their noble objectives in the Crypto-Verse and the overwhelming potential of the coins in the markets. Etheruem has made smart contracts possible and we are seeing developments daily. Cardano’s platform aims to improve on the said smart contracts and also develop financial applications on the blockchain. Both coins are destined to Moon in 2018.

Allow me to categorize Tron (TRX) and Tether (USDT) as the Bad lot in cryptocurrencies for the simple reason that the two will stop at nothing to stay relevant even if it means fighting FUD and the authorities.

With respect to Tron (TRX), the FUD around the project and token is that its whitepaper is plagiarized and that Jutin Sun is a shady guy when it comes to finances. Both of these accusations have held no water and the Tron Project is still going full steam ahead with all the things promise in its roadmap.

Tether (USDT) was currently served a subpoena by the U.S Authorities to prove that it does have the cash it claims to be backing the 2.2 Billion USDT coins in the market. When the feds come looking for you, then you must be a bad guy.

The coins I want to generalize as being Ugly, are the ones that keep us on a coin price rollercoaster in the markets. They keep us anxious every day with hopes of going up when in reality, they are tanking like Kamikaze pilots during World War II. Then somewhere along the fall, we see a glimmer of hope when a slight price pump occurs.

Bitcoin (BTC) fell from a record $20,000 to $6,200 in less than two months and took down the entire market with it. Verge (XVG) has not fully recovered from the New Years debacle when we expected to celebrate the new year with the release of the Wraith Protocol. The Wraith release happened unceremoniously 8 days later.  Litecoin (LTC) is showing a glimmer of hope with the release of Litepay on the 26th of this month. But this is after Charlie Lee dumped all his LTC a while back in a move Litecoin believers thought was close to betrayal.

In a nutshell, the main goal of all our beloved coins is to make us profits in the markets. But with each coin, comes a story-line that can be compared to the 1966 Western known as The Good, The Bad and The Ugly. The movie is a classic that also has the best theme song ever to grace Hollywood!