Stop reading if you do not like Rumors. Rumors can be fun or hard on your health, make you blood pressure rise, even cause hysteria. All reasons we love them.

What if you knew Ripple and Monero were headed for Coinbase? Would you buy them now before the official release? I bet you would. We have mentioned before Ripple was the next likely candidate for Coinbase due to the rapidly expanding banking partnerships and role in international monetary transactions. Ripple can process 1000+ transactions per second making it easily scaleable. For reference, Amazon conducted 600 per second on Amazon Prime day 2017.

Coinbase has a very good help feature as any online company should. You can ask it questions or search for key words to link up to matches in the help topics. The help page looks like this. From here we can get information about Litecoin (LTC), Bitcoin (BTC) and Ethereum (ETH). All supported coins on GDAX and Coinbase. 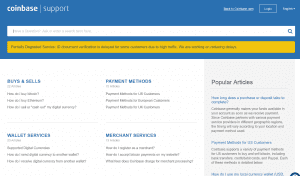 Monero making a large move up the top 10

Now follow us down the rabbit hole of speculation and rumors. Remember, you heard it here at cryptogazette first. If you search for any supported coin you get several links including once called “Supported Digital Currencies”. Obviously Litecoin (LTC) is a supported currency on Coinbase as are Ethereum (ETH) and Bitcoin (BTC). There are other links there also about Litecoin trading and deposits. The supported currency link did not fit on one screen and was cut off for this article. Similar results can be found with Bitcoin and Ethereum searches. 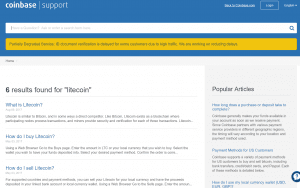 For grins we decided to search for other coins. You never know what you might find. First we tried Dash. Of course it came back with no matches as we would expect. It is not a supported currency and Coinbase does not post information about non-supported currencies. We tried several other coins including IOTA (MIOTA), Cardano (ADA), Populous  (PPT) all with similar results. We chose to only post two to not blow up your monitor with pictures. Coinbase had no links for any of the popular coins in this group.

Then something interesting happened. First it was Ripple (XRP). When placed into the search box a single match is presented. Supported Digital Currencies. Why does Coinbase match up to Supported digital currencies with Ripple when it is not supported? We have speculated before that Ripple was a likely candidate for addition as it has many banking partners and Coinbase is looking to bring in institutional investors. No better way then through big banks to bring in big money. We made this one larger you readers to daydream about. 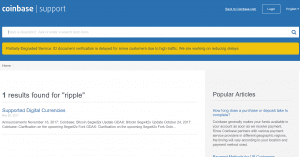 As we tried more coins we found another match with Monero. When we speculated about Ripple we also mentioned Monero as not a candidate due to the IRS and the privacy aspect of the currency. This can be overcome on Coinbase as to trade you must register and verify an account. Trading occurs on the GDAX platform and not via the Monero blockchain which avoids the privacy nature of the coin. The match was the same as Ripple above. Supported Digital Currencies. 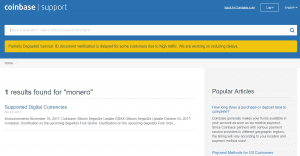 No news from Coinbase on the issue yet. What does the link take us to? Did we find Monero and ripple on the landing page after the link? The simple answer is no. Ripple and Monero were not on the linked page. Only the typical and expected Bitcoin, Ethereum and Litecoin were found. 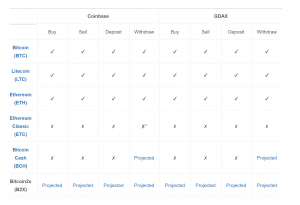 We must point out that there have been no announcements and we have zero insider information about pending announcements. It could simple be an incorrect link. As the search page belongs to Coinbase though it is also possible someone linked the pages in anticipation and they were not supposed to be updated yet. Now that we have the screenshots for proof it will be interesting if Coinbase takes them down as news spreads. Any mention of addition to Coinbase would likely result in a large price move heading into 2018. Ripple (XRP) and Monero (XMR) could be next.