Not sure we can say this enough but volume matters. What also matters is fiat exchange for coins. The combinations makes trading into and out of coins much easier and cheaper than wandering from exchange to exchange while waiting for Bitcoin transactions to process. MonaCoin (MONA) this morning was approved by the Japan Financial Services Agency to be added to 4 more exchanges today. In the last 24 hours MonaCoin has done more volume than Bitcoin (BTC) on Xtheta.

Within the top 10 crypto coins by market cap the last 24 hours has MonaCoin with higher volumes than Bitcoin Gold (BTG), Cardano (ADA), and for a time Ripple (XRP) before Ripple trading picked up. On a market value just over $1 billion and volume over $140 million, MonaCoin has almost 15% of total market cap in trading volume. 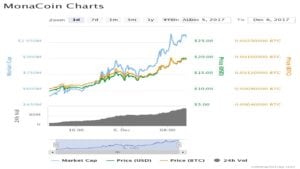 Despite Japan as a technological leader in the world, it is a relative latecomer to the cryptocurrency trade. MonaCoin (MONA) is the first Japanese crypto coin and was developed in 2013. Mona is a popular cat cartoon and was chosen for the center of the coin. It has grown slowly until this year as acceptance has grown. Mona competes with NEM (XEM) for broader acceptance in Japan. The 24 volume on MonaCoin (MONA) shows us there is demand though in the Japanese market.

MonaCoin is a mined coin similar to other currencies and is based on the Lyra2RE (v2), the same algorithm as Vertcoin (VTC). Mona has a max supply of 105 million coins when mining is complete and currently almost 56 million in circulation. With no developer pre-mine there is little concern for a dev team looking to profit from a new coin when it was first launched.

See why Hirematch.io is trying to Ripple the Job market with the blockchain

Unlike other coins there has never been a “whitepaper” explaining MonaCoin. It was released by Mr Watanabe as a game although the true identity of the developer is unknown. He/she is also not part of the MonaCoin Project which can be found here.

What is MonaCoin used For?

Mona the cat is quite popular in Japan which has a large following for anime and cartoons. Since launch MonaCoin has had several third party features added which has slowly increased the acceptance and usefulness of the coin. It is widely used online in gaming forums as a means for a tip via a third party app.

Monappy is one of the most popular add ons for MonaCoin. It is a digital wallet which can be placed on a cell phone and makes transfer from person to person very simple and fast. They have an active Twitter account and a very anime character theme. The app is popular just as Kakao is popular in South Korea.

Originally meant to be a means of giving “thumbs-up” on 2channel forums, Mona has grown and is now used at one of the largest PC Marts in Akihabara and recently had a large advertising campaign in the Akihabara area of Tokyo. This are is home of video gamers, technology stores, compute sales, and many cartoonish fetish style cafes and restaurants based on popular anime in Japan.

Now after addition to several exchanges and some acceptance as currency it is growing as a form of payment although it has no major financial institution partners. It is mostly used by fans of the coins, Mona the cat, and 2channel as a means to trade for goods or services.

Almost 90% of the market volume is connected to two exchanges in Bittrex and Zaif on coinmarketcap but we expect this to change once the new exchanges are added. Without major financial backing or partnerships, no clear vision as a second generation cryptocoin or blockchain business and without wider acceptance Monacoin maybe relegated to the top 50 without ever making the top 10 in market cap. The 100% run today may be about as high as the coin ever sees. With other coins like IOTA, Ripple (XRP), Power Ledger (PWR), and Hirematch.io pushing the second generation crypto economy this coin may become an also ran with a large following among Japanese youth, anime fans, and 2channel online forums. And maybe that is what Mr Watanabe wanted in the first place.