Market Volume matters. The cryptoworld changes daily and as news is released and interest grows demand for coins ebbs and flows. We have talked extensively about the importance of trading volume and the direction price momentum. Yesterday came the announcement of IOTA launching the limited data platform with several dozen companies testing the network and performing real trades for data. That caused IOTA to explode in price and into the top 10 in market cap and now sits at #5. If the momentum continues, IOTA will pass Ripple for #4 soon.

Check out the Ripple volume compared to Monero and Litecoin article.

Both articles cover the basics of why we think Ripple has stagnated and retreated since the market sell-off November 28th and has yet to recover its losses. IOTA has done exactly the opposite. It is part of the new crypto-economy or the new generation of blockchain companies and got the product to market to begin monetizing the technology. With the announcement suddenly everyone needed to own IOTA and the trading volume launched. Liquidity matters, both for price appreciation and price decline. Lets take a look at IOTA (MIOTA) and Ripple (XRP) and see why Ripple is not secure at #4 based on market cap.

Unless you started studying the cryptoverse yesterday then you heard the news when the IOTA foundation launched the data marketplace. Some of the largest companies in the world are testing the network now and making real trades of MIOTA for data prior to wider release expected not long after the new year. This chart is the 7 day history and covers most of the recent IOTA run up on the news. 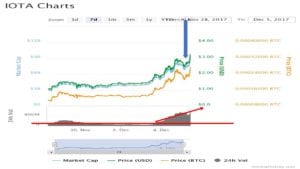 We see the clear spike in IOTA volume which started late December 3 and continued until mid day yesterday before hitting some resistance. With that resistance we also saw the appreciation level off. We saw a similar bump November 30 with the broader crypto market recovery from the correction which is not shown on this chart. Now let’s look at the 24 hour chart as it gives a good idea of what is happening with the volume now and gives clues to the market price. 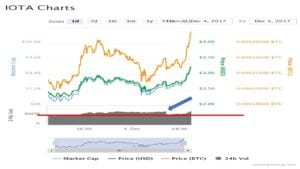 Same source although we paid twice as much for the editing

Here we see a floor at 800 million 24 hour volume. It climbed just above that market as the price peaks. Over the last few hours that volume has sort of waffled without much change in the price. Just as we went to press the price tried to make another run as the volume picked up.

This tells us the 800 million 24 hour volume may be key. If the volume drops below that mark we may see the price decline and if it can sustain above that number the price should hold or perhaps increase. The last 24 hours has seen over $1 billion in trading volume on a new market cap of $9 billion for IOTA. At 11% the IOTA market is quite liquid at the moment and may have reached equilibrium and why the price has held.

Ripple (XRP) reached some resistance and a large drop in volume following the recent run up to #4 in market cap.  The 7 day chart shows the dramatic decrease in volume as the market became much less liquid from the run-up. From 2 December until today though the price has held steady in the $0.25 per XRP range as the volume reached a floor between $80-90 24 hours volume. 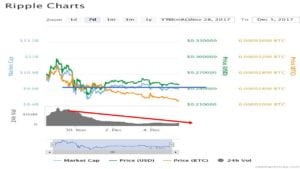 Looking at the 24 hour chart starts to show a slow increase in volume from the lows. Ripple managed to get above the $100 million and was at $124 million at publishing. The increased trading volume has yet to move the price but may indicate a move coming. With a bit of news Ripple could be set for another run. 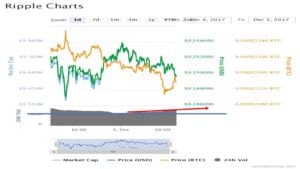 A pattern is created when something occurs 3 or more times in a similar fashion. With market volume it has become near synonymous with increase crypto prices. IOTA has moved into the top 5 market volume seemingly overnight with the market launch of the data trading platform. We have covered other companies headed in this direction including PowerLedger (POWR), Cardano (ADA), and Populous (PPT). Hirematch.io and Connectjob.io both hope to do the same for the job market and can be reviewed here and here respectively. Both have solid products which we can already see and are launching soon. Perhaps they can be the next Ripple (XRP) or IOTA (MIOTA) and blast into the top 10.

Ripple (XRP) or IOTA (MIOTA): Who Will Champion the DLT Cause?