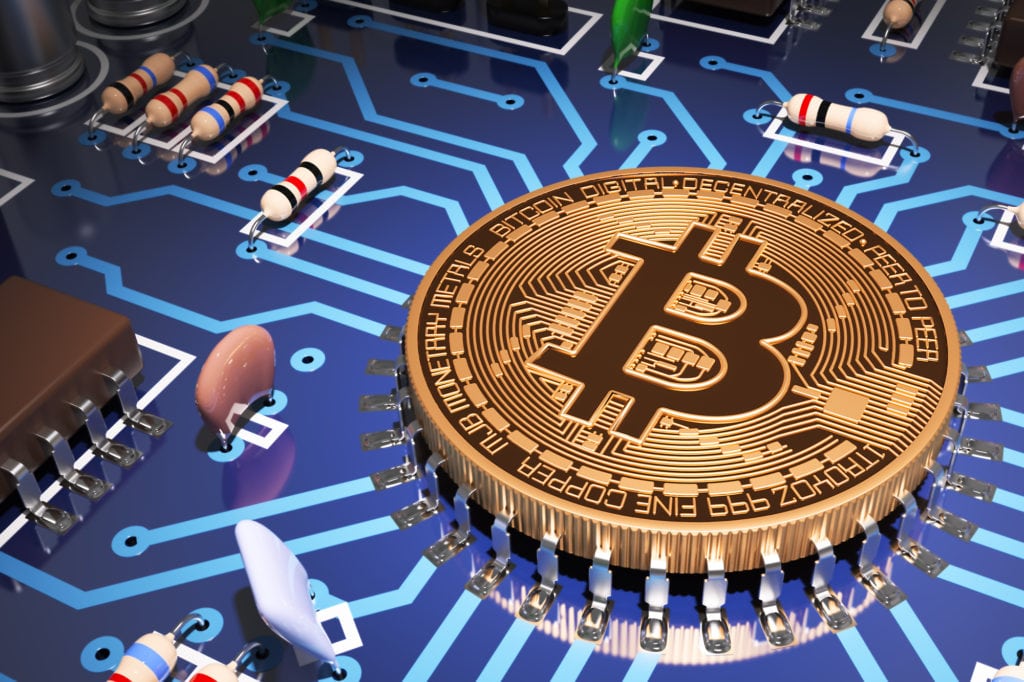 Bitcoin price has been rising abnormally for the last few weeks while there is no substantial improvement in its fundamentals and technology. It used to be priced under $1000 in the first days of 2017, whereas currently it is hovering around $9000. Technically we are very close to make a top. Why? Several indicators are signaling that the price is overextended and needs to correct. Besides, what goes up, must go down! 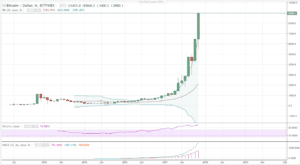 It is always better to start analyzing the technical situation from higher timeframes. The monthly graph resembles to a parabolic shape where it is unsustainable for longer times. Bollinger Bands is one the crucial indicators which states that the candlestick cannot start and close outside the bands. Current candlestick which represents the month of November is the largest candlestick that has ever been observed in BTC charts. Its low end is at $5400 while its highest value approaches $9100, though, it still has a few more days to close. According to the bands, the next candlestick will most likely open outside the bands, and in order to comply with the Bollinger Bands indicator, the price will either go up more (above $10000) or it will correct downside touching the upper band. 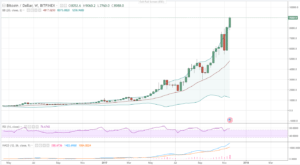 The weekly chart indicates that whenever the price topped, it entered a period of consolidation which lasted several week, however current bull cycle has not really consolidated so far. In addition to this, RSI indicator is signaling an overbought condition, along with MACD indicator being overextended to upside. Bollinger bands for the weekly chart is also useful where the price tends to touch or get very close to the 20 period moving average at the end of the consolidation periods.

Why am I talking about all these stuff? Well, it is because many people nowadays think that this bull run will continue forever and never stop. This is why most newcomers keep buying BTC without even thinking and analyzing, expecting it to rise and profit them. Besides, there is a constant propaganda on social media platforms that BTC price will knock the door of $10000. I am fearful when most people are greedy because once the price tops, the correction might be quite bloody and especially newcomers will sell at a loss and lose a lot of their cash because they expected to profit continuously and once this stops, they will panic and act based on their emotions. I am so sure of this happening as this has happened many times in crypto, for instance, when BTC hit $5000, it went down all the way to $3000 just in 2 weeks.

My current prediction for the price correction is based on several indicators and support/resistance levels. Based on daily ichimoku clouds, $6700 is a support level and it might hold, however if a wave of panic selling happens and negative news are released, then $5000 will be the strong support level and I expect this level to hold and price should jump back up from here. On the other hand, the top might be very close to $10000, or even slightly above it. However, it is very risky to buy at these levels based on the technicals.

As a summary, do not let greed make you act based on your emotions in trading as in this market, bulls make money, bears make money but pigs get slaughtered.