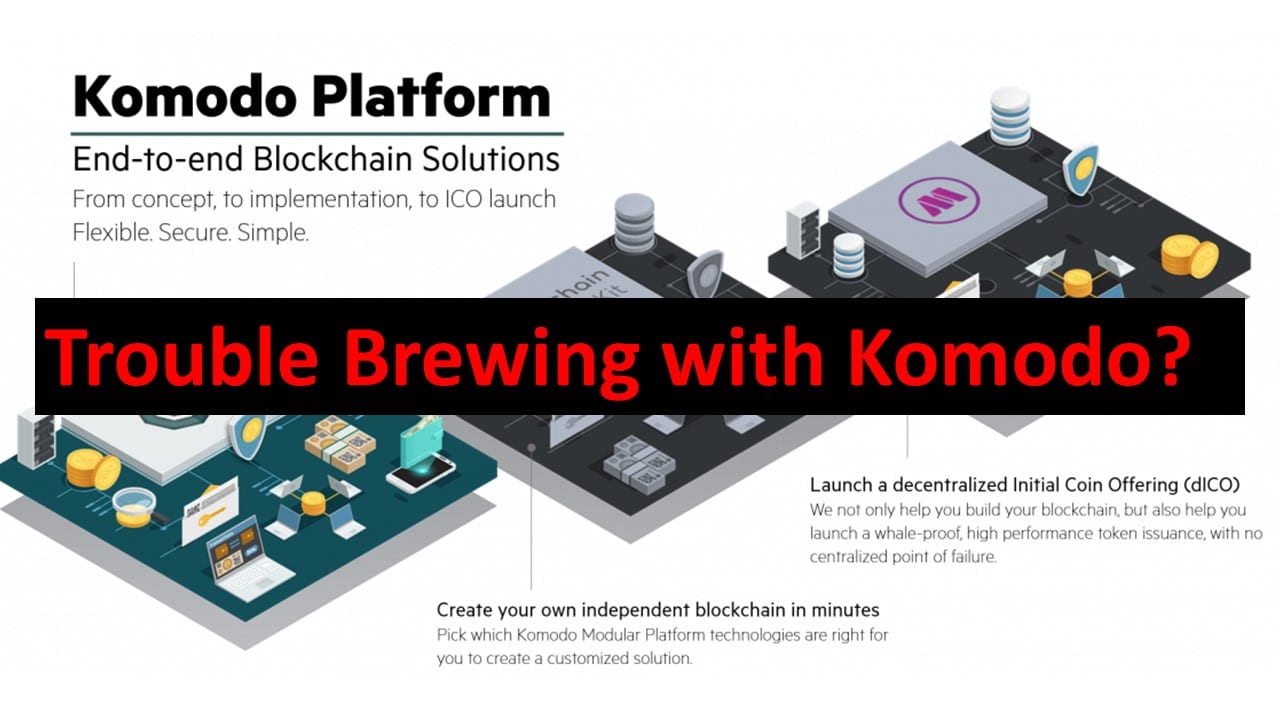 Full disclosure – this is a developing story we wanted to bring you first as a leader in crypto news. Some details have been verified by our team and others are the account of Natasha Homer-Early who reached out to us to share her story.

Yesterday we brought you an update on the coming dICO from Komodo. What you may have missed is one of the comments at the bottom from a person who claims to be the former CEO of Komodo.

Natasha Homer-Early left her contact email so we emailed her and waited for a response. She was eager to share details about her time with Komodo and concerns that forced her to leave after only 18 days as the CEO. She was very pleasant to converse with via email. No Skype or phone email was conducted.

She has posted a detailed account of her time with the company here but asked that we put something together to get her story out. Some of the details from our emails are below.

Natasha first became involved with JL777 (founder of Komodo) through iGaming when he needed some guidance on a project. Natasha is a former CCO in iGaming. She began working with JL777 in a project manager capacity on iGaming in September 2017. It was during this time they began to talk about Komodo and issues during development.

JL777 explained that Komodo had developed out of the Supernet Community through various people volunteering for roles as they came up. JL777 explained that he had no intention of running Komodo day-to-day operations which had resulted in the ‘team’ self-managing sort of rudderless. One CEO was appointed and rejected by the employee investors who refused any form of management.

Natasha’s linkedin profile can be used to verify details of her previous work experience. The only announcement of her status as CEO came via Slack which could not be verified by cryptogazette for this article.

During our email conversation she also brought up her concerns with Monaize and the coming dICO. Monaize is a Prepaid Card issuer regulated by the Financial Services Authority (FSA) in the UK. The coming dICO which provides owners a portion of profit in the company acts as a defacto ownership shareholding but the dICO is not currently regulated or approved through the FSA. She believes Monaize has very serious regulatory concerns that have not been addressed prior to launch of the dICO. The CEO of Monaize has accept Natasha’s invite on Linkedin after being contacted by Natasha to discuss her concerns directly following her separation from the Komodo project.

In addition to the concerns above she also expressed possible sex discrimination in the workplace although these claims could not be verified. She discussed an incident when as CEO she desired to laterally move a male employee to a position that better suited his skill set. She noted this was not a demotion but a lateral move.

When JL777 was told about the move he prevented it by allowing the employee a vote on his change in position. This led to a no vote on the move which trumped Natasha in her CEO role. Five days later without consultation or her having an equal vote she was removed from her role as CEO and placed into a project manager role. When she was informed of the removal she resigned on her 18th day on the job as CEO.

cryptogazette wanted to take more time to delve into this story but it seems to be developing as we write. There is a pending interview to be published on another competing new agency but we wanted to be first and as such left out some of the details we were unable to verify. These details can be reviewed on Natasha’s account which she has posted on her linked in profile.

Just to prove the point this is still a developing story a response was posted to my previous article which seems to indicate there are more details to come. The identity of the writer could not be identified and no contact info was left.

Investing in any crypto has risk. News is coming from Komodo and is Natasha is correct and discussing her concerns with Monaize there may be a major announcement which could impact Komodo’s coin price.

Look for the interview with Natasha and check out her story which we linked above. Hopefully a response from Komodo as all stories have two sides. Komodo could not be reached for comment but we welcome a response.

Komodo - Privacy from Zec and Monero plus Atomic Swaps from Litecoin

Komodo Enters Race with Monero, Litecoin, and Bitcoin for Privacy